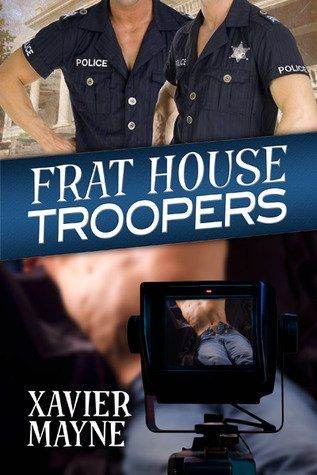 Despite his mortification, Brandt gives the audition his best “shot”—and becomes an overnight sensation. But to meet the man behind the operation, he’ll have to give a repeat performance, this time live on webcam opposite the highest bidder. Donnelly makes sure to win that auction for his partner’s sake, but their plan has a flaw: faking it is not an option.

In the aftermath, Brandt is a humiliated mess trying desperately to come to terms with what he’s had to do for the job and his own mixed feelings. But Donnelly has been on a journey of discovery of his own. Suddenly everything the two men thought they knew about themselves and each other gets turned inside out. Meanwhile, they still have a case to solve… but it may not be the case they thought it was.

Looking for a serious, in-depth police procedural looking at the dark underbelly of sex work? Don’t read this book.

Want a fun, irreverent read about buddy cops who are charmingly oblivious about the attraction underlying their friendship, peppered with wonderfully indulgent sex scenes (we’re talking thousands of words long), wordplay, humor and a positive outlook on humanity? This is the perfect read.

Xavier Mayne does a great job with the omniscient voice. Although the narration mostly follows Officer Brandt’s perspective, we get to see the story from other perspectives as well. Mayne did a particularly good job including both Brandt’s and Connelly’s perspectives in love scenes—not something that many authors can pull off smoothly. The perspective switches felt natural, and I probably wouldn’t have even noticed them if I wasn’t a writer myself who consciously pays attention to these sorts of things.

A note: I’m not a fan of the “gay for you” genre. I prefer m/m romances about characters with a clear gay or bisexual identity, or who have one by the end. And yet somehow I ended up enjoying this book immensely. Sure, I’d go “hmmm” every time a man in love with another man would call himself straight (the subject came up several times in the book), but I’m not the language police and even if the narration didn’t convince me the characters were straight by *my* definition, I could buy that this was how they saw themselves. It was interesting that even though they saw themselves as straight, they also felt comfortable among gay-identified men and in being part of that community. And it helped that this book doesn’t take itself seriously at all. Nonetheless, readers who would be deeply offended or disturbed by such “straight” talk should probably not read this book.

Otherwise, I recommend this as an enjoyable light read that also raises interesting questions about sexual fluidity and the value of sex work.

You can buy this book from Amazon, Barnes & Nobles, and a dozen other retailers.

You can also read this review at Goodreads.