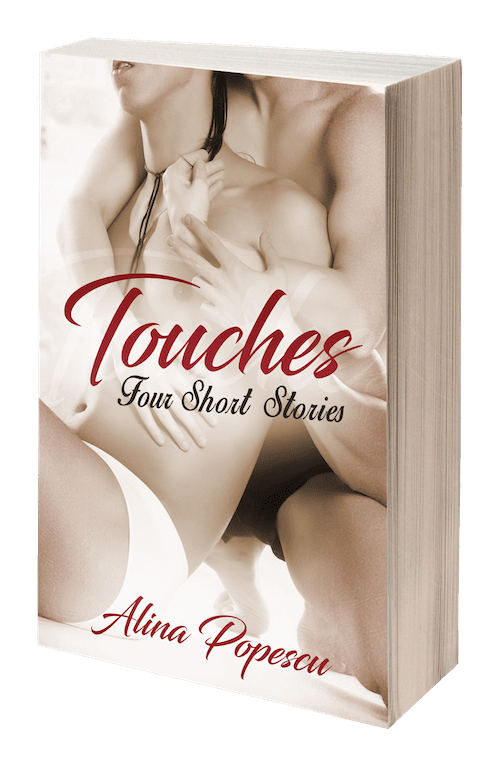 I first got to know Alina Popescu’s work when we were both publishing fiction with Wayward Ink. I read some of her short stories in anthologies we were both in, including her interconnected tales about the sometimes-rocky friendship between Romanian characters Tudor and Radu. Each story stood on its own—readers encountering the characters for the first time wouldn’t be lost, even if they read the third story before the first—but for the return reader, it was fun to look for Tudor and Radu every time an anthology came out and discover what they were up to next.

Now, the Tudor and Radu stories are available together for the first time in Touches, a collection of four contemporary gay romance short stories following the same cast of characters. It includes three stories previously published by Wayward Ink and one story original to this volume. You can read them in any order, but now that all the stories are in one book, why not read them chronologically to see how the characters change through time?

Synopsis of Touches by Alina Popescu

Sometimes a single touch is enough to change everything. Physical or emotional, a touch can tilt the world on its axis and shift your entire life. It can lead to hell, or it can lead to paradise, but things will never be the same…

A Touch of Glamour

Tudor has big plans for New York City: Ditch his homophobic colleague. See a musical. Definitely check out the go-go boys. Meeting one Phantom on Grindr wasn’t in the script.

Tudor gets caught up in a whirlwind when his favorite musical character steps off the stage and into his life.

A Touch of Paradise

Hauled to work in Hawaii, Tudor has little time to enjoy the island paradise. His obnoxious friend Radu has it much easier, using his free time to set Tudor up, dangling a willing Hawaiian beauty in front of him.

Having been burned by long-distance relationships before, Tudor stubbornly resists Kahoni’s advances. But can Tudor be worn down enough to enjoy a touch of paradise?

A Touch of Kink

A moody and angry Tudor follows his friend, Radu, to the airport to pick up a client. Despite Radu’s efforts, he’s still sulking over his boyfriend, Kahoni, not being able to fly over for his birthday.

But the airport only opens up the door to a stream of steamy surprises for Tudor. Will his mood improve?

A Touch of Gay

Loud-mouthed Radu has always joked with Tudor about his friend’s gay rubbing off on him. Neither of them has taken that joke seriously until Radu’s meltdown and crazy confession: Radu thinks he might be gay.

And that’s the easy part. Getting enough courage to talk to Marius, the man Radu has been crushing on for months—that’s a whole different challenge.

Touches by Alina Popescu may be a romance anthology, but the real star of the series is the friendship between Tudor and Radu. Tudor is out and proud, but with Bucharest’s gay community being so close-knit, it feels more like a family to him than a field of potential boyfriends. When we meet him at the beginning of the anthology, he hasn’t dated in a long while and has almost given up on romance.

Tudor’s coworker Radu is a total boor, and at first Tudor can’t stand him. Radu is the kind of guy who thinks his own jokes are funny, especially if they’re offensive. When he starts showing a prurient interest in Tudor’s sex life, Tudor naturally assumes Radu is a homophobe and tries to stay far away from him—a difficult task when they’re on business trips together. But eventually Tudor figures out Radu’s invasive questions and tactless remarks are poor attempts at friendship. Radu just needs to learn how to not be so douchey when he asks questions.

Popescu is Romanian and I love how she infuses little bits of that perspective throughout the book. In the story set in New York, Tudor almost gushes over how easy it is to navigate the city’s streets because they’re laid out in a grid. Back home in Bucharest, streets just sprouted willy-nilly as the city grew. They curve and snake—and some end abruptly—so that figuring out how to get from place A to place B is like figuring out a puzzle. I spent the first part of my childhood in Europe before moving to the U.S., so this little moment made me laugh in recognition as I remembered by own amazement at the geometric layout of American cities.

“Touch of Gay” is the story that is original to this volume, and I admit to being a little hesitant before reading it. Did the title imply that being gay was contagious? Was this going to be a gay-for-you story where two men fall in love but can’t even bring themselves to consider they might be gay or bisexual?

Having read other Popescu stories, I should have known better. “A Touch of Gay” was a sweet and sometimes hilarious story about a guy who comes out later in life because he alternately misinterpreted or ignored his attraction to men for years, largely because his cultural upbringing made little room for homosexuality. Despite all that, there is zero angst in this story. Once Radu figures out what he wants, he goes for it.

This collection of stories makes for a series of lighthearted, romantic reads.

Excerpt from A Touch of Glamour by Alina Popescu

As everyone before him, Vincent had a bit of a shock at finding out the Romanian capital had only one gay club. Tudor was used to it, now that he’d accepted his countrymen liked to hold on to a tad of the Dark Ages.

“Come on, I’ll walk you back to the hotel,” Vincent said many hours later. He grabbed Tudor’s hand with such ease that he managed to send shivers all over his body. Tudor had always craved such casual PDA, a thing hard to do back home. He smiled as Vincent dragged him through the busy coffee shop and out into the street and kept smiling all the way to the hotel.

Tudor was excited, walking on clouds, and painfully aware of every touch or accidental brush of Vincent’s. It had been a night of surprises and contrasts and he feared the fast approaching end. The theatre had been a ten minute walk and the coffee shop had not been far from it. So he had to admit with a cringe that their stroll under the moonlight could never be long enough for him to be sated.

They stopped in front of the hotel, facing each other. Tudor took Vincent’s other hand in his free one and gave it a little squeeze, grinning at him when his date locked eyes with him.

“This has been one of the best nights I’ve had in a long time,” Tudor said in a hushed voice. It was actually one of the best ever and clearly in the lead as far as first dates went, but he wasn’t ready to admit that. “Thank you, Vincent.”

“No need to thank me. I haven’t felt so great just being out with someone in a long time either. So it’s been… mutually beneficial,” he said after a quick search for the right words. He winked playfully and tugged gently, bringing Tudor’s upper body closer. They met half way, a soft brush of slightly cold lips. Tudor’s whole body tingled, and he pressed more, feeling Vincent’s full lips parting under his. His tongue took the gracious invitation and searched for Vincent’s, gliding with it in a slow dance. Tudor moaned, momentarily unsteady, and Vincent took over the kiss. 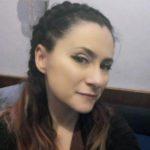 Writer, traveler, and coffee addict, Alina Popescu has been in love with books all her life. She started writing when she was ten and even won awards in local competitions. She has always been drawn to sci-fi, fantasy, and the supernatural realm, which explains her deep love for vampires and is also to blame for this trilogy.