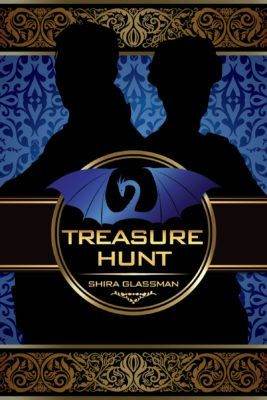 I’m thrilled to have Shira Glassman as a guest on my blog today. Her books have been shortlisted for the Bi Book Awards and Golden Crown Literary Society Awards. She’s a delightful writer with diverse interests, but probably best known for her fantasy Mangoverse series, starring a nerdy young lesbian queen in a world with dragons, wizards, magic spells, shapeshifting witches, and Jewish culture. Dragons also appear in her male-male erotic short story Treasure Hunt, recently re-released with a gorgeous new cover by Jane Dominguez. Here’s the teaser: When the Empress sends her Imperial guards Vasily and Aleksei into the dragon’s cave to steal treasure, they doubt the existence of the dragon and take advantage of the time alone in the dark to drink vodka and fool around. Little do they know, the dragon is watching Vasily’s expert domination, and he likes what he sees!

Shira took a moment to tell me how she got her idea for the story: “The main inspiration for this story is, I must confess, extremely shallow — I find certain types of men’s uniforms extremely attractive, and wanted to explore that in a spicy way. I’m talking about the old-fashioned ones, from bygone centuries — in this case, long Russian dress-coats from centuries ago. I’ve seen them in operas like Prince Igor and Boris Gudonov, and since I’m not quite up to the task of writing actual historical fiction, I thought I’d just pop ’em into a fairy-tale setting like usual. So you have Vasily, a natural Dom who oozes competence and confidence, and Aleksei, the ‘aging pretty boy’ who follows him around. As for the dragon, since he’s transmasculine I let a bunch of trans guys on Twitter vote on what color he’d get to be. They overwhelmingly, independently, picked iridescent blue. He can’t help but be captivated by Vasily’s charms just like Aleksei is. As I hope you will be, too!”

I love that this story is told from the perspective of the dragon, as you’ll see in this excerpt:

Moving in slow motion so that I wouldn’t make noise, I crept through my piles of coins and gems, my crowns, and my art from forgotten civilizations. I could see in the dark, and I wanted to keep an eye on these two, as well as an ear.

I peered over the top of a ledge that overlooked the clearing they would reach if they kept following the water. Nothing yet, but the footsteps were getting stronger.

The glare of lanterns, dancing against the walls as they walked, heralded their invasion. When they came into view, I studied the two intruders.

They were dressed in the uniforms of the Empress’s imperial guard. A smart black jacket with a flared skirt and a high, stiff collar accompanied black trousers and sturdy black boots. Hanging from each man’s side was a sheathed dagger. Of course my eyes went straight to the shiny silver buttons that held the jackets closed…I like shiny things. Don’t look at me that way, what else were you expecting?

One of the men was very tall, broad, and generously-stomached, with hooded eyes peering over a beard. His hair was in a short, scruffy ponytail and he filled out the uniform nicely. The other I might call an aging pretty-boy, with wavy hair and a sculpted, clean-shaven face. I guessed that he was probably the whiny one, Aleksei. When the conversation started again, I found I was right.

“Still no dragon—and still no treasure.” He swung his lantern around in an arc, and I ducked into the shadows briefly.

“No, just a nice, peaceful chamber to sit down and eat our lunch,” said Vasily. “Unless you’re afraid the smell of knishes will attract dragons.”

Fans of m/m romance may also be interested in Shira’s short story The Artist and the Devil, about an art teacher who’s worried that the mysterious businessman he’s attracted to might literally be the devil, and her fantasy novel Climbing the Date Palm, about a handsome prince who falls for a labor activist who stands up to his dad. Shira also writes f/f romance, both contemporary and fairy-tale–style fantasy; readers who love dragons will find her favorite one in the Mangoverse novels.