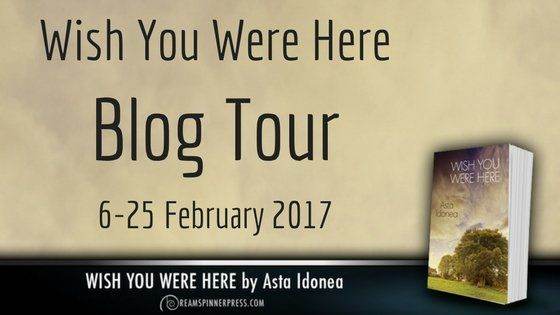 I’m excited to have Asta Idonea on my blog today. We have appeared in a lot of anthologies together, and I love her writing.  She has a writing style that gets right to the heart of her characters’ emotions.

Her newest release is Wish You Were Here, a sweet romance novella about two college-age men who have trouble with their families but find solace in each other. Oakley has always felt distant from his parents, but with the recent death of his sister, the rift between them has grown even wider. Bobby has been kicked out of his conservative parents’ home after they found him in the arms of another young man. Here is the summary from her publisher, Dreamspinner: The death of Oakley’s sister has left his family broken and buried beneath their grief. In an attempt to get out from underneath their pain, they rent an isolated cottage in the Cotswolds. For Oakley, it’s an exercise in futility. He doesn’t see much hope for things to get back to the way they used to be, and he’s bored and restless as he waits out the time until he can return to the city and university. All of that changes when he meets local boy Bobby, and the connection between them is instant. Within a few days, Oakley is ready to walk away from everything to stay with Bobby. However, Bobby has problems of his own, and they might be more than the budding romance can survive. But they might also give Oakley a new perspective on his own situation.

Summer passed England by that year, as if it shared his family’s grief and refused to intrude upon such solemn days with unwanted sunshine. A cool, wet July turned into a blustery August, and now a dismal September loomed. From the window of their rented cottage, there was nothing but gray skies as far as the eye could see. The fields spread out in a patchwork of shortbread and moss. Plentiful rain meant the grass stood tall, but the lack of light filtering through thick, heavy clouds dulled its various shades of green. And this bleak scene was supposed to make everything better?

Oakley sighed and turned to the sink. He poured himself a glass of water from a spluttering, corroded tap and took a sip. Despite the dubious appearance of the fittings, the water was clean, tasteless, and refreshing. He supposed he should at least be thankful for that. It was likely to be the only pleasant thing this vacation would provide.

Dale’s Review of Wish You Were Here

Despite the difficult situations these boys find themselves in, I enjoyed the story as a pleasant, escapist read. I found Oakley to be a little pouty for my taste, but it made sense considering his age, personality, and the situation he was in.   And it made it even more impressive that Bobby could bring out Oakley’s lighter side. These two click very well and very quickly, and I found it believable. Some real-life romances are just like that, and I loved that they could be happy together.

As the story progressed, I found myself wanting to know more about Bobby and was a little frustrated that I wasn’t getting as much information as I liked. But it was an enjoyable sort of frustration, where you know that the author will eventually get around to telling you and the wait will be worth it. And let me say, the wait really was worth it. Everything made sense in the end, with all the pieces of the story sitting together perfectly.

This is one of those stories that stuck around with me after I closed the book. I kept thinking about it on and off throughout the week after I had finished reading it, and would occasionally go back to read sections so I could ponder them. As I savored the story, I grew to like it even more.

I would recommend this novella to readers who enjoy sweet romances with realistic characters and interesting plot twists.