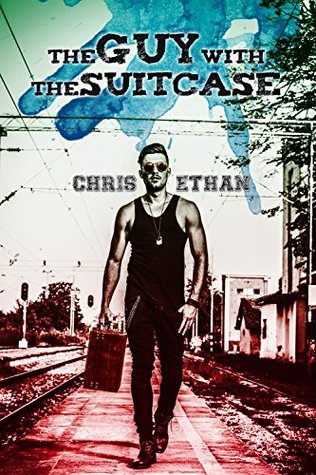 Today is the last day that proceeds from The Guy With the Suitcase by Chris Ethan are going to the Russian LGBT Network to save lives of gay Chechens and others being persecuted for their perceived sexual orientation.

I finished the book last night, and it was refreshingly unlike most romances I’ve read recently. The main characters aren’t alpha males, they don’t have six-pack abs (or if they do, it’s not their defining characteristic), and I can’t imagine Chris Hemsworth playing either of them in the movie version. (Not that there’s anything wrong with Chris Hemsworth, but I like a little variety in my romances!)

Twenty-one-year-old Pierce is a redhead with a temper as fiery as the color of his hair. His ultra-conservative parents kicked him out and stopped paying for his college when he came out. Now he’s living on the streets of New York City with one constant companion: a suitcase willed to him by his gay grandfather.

Twenty-year-old Rafe is also homeless. His parents didn’t exactly kick him out, but his father beat him so frequently that staying wasn’t a viable option. He’s also chronically ill. He sells his body for an occasional night in a warm bed and to pay for his expensive medication.

Their paths cross when Rafe makes the stupid decision to steal Pierce’s suitcase. Pierce chases Rafe down and beats the crap out of him in the process of getting his suitcase back. But once he stops throwing punches and Rafe apologizes, Pierce starts to realize that Rafe’s desperation isn’t so different from his own. A tenuous truce forms, and then a friendship that alternates between steady and shaky; it can be hard to get along with someone when you’re hungry, tired, and haven’t had a shower or changed your socks in days.

The portrayal of homelessness in this book is depressingly realistic. I could feel the despair of the characters throughout. Rafe’s situation was especially heartbreaking. He needed assistance to buy his medication, but because he had no address or other required documentation, he couldn’t apply for Medicaid. And because all his money went to medicine, he couldn’t afford a roof over his head. It was an awful Catch-22.

The characters weren’t always easy to like. Pierce was particularly mercurial, going from affectionate one day to hostile the next. A lot of this is due to the way his upbringing screwed with his image of himself. His parents taught him that gays were disgusting, so when he realized he was gay, he had a hard time forming a healthy understanding of himself and his desires.

Despite that, Pierce has a strong drive to improve his situation. But he’s only able to take small steps at a time. He does his best, anyway. Maybe he can’t get an apartment, but he can earn enough money to buy a winter coat. Working toward these goals helps keep his mind off the desperation of his situation.

Rafe’s home situation certainly wasn’t ideal, but his mother showed him a lot of affection and never condemned his sexual orientation. Rafe developed a fairly healthy self-image despite his dad’s abuse, and never internalized his father’s belief that there was something wrong with him.

Because of this, I often found Rafe’s behavior more predictable and easier to understand than Pierce’s. Rafe tries to see the best in people and treat them kindly (when he’s not stealing suitcases from them), and his positivity starts to rub off on Pierce. And Pierce’s goal-oriented way of dealing with his situation helps Rafe persist in getting better access to healthcare. They both learn from each other and, eventually, they each get the happy ending they deserve—not only in love, but in life as well.

The Guy With the Suitcase by Chris Ethan is available only on Amazon (universal link). Pick it up tonight to help the Russian LGBT Network with its life-saving work.

Learn more about the Russian LGBT Network and the situation in Chechnya at Readers & Writers for LGBT Chechens.