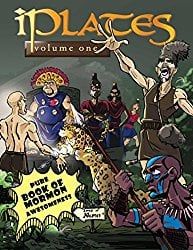 If you find yourself falling asleep every time you try reading the Book of Mormon but are still curious about its contents, you might want to try iPlates Volume 1: Zeniff, Abinadi, Alma, and Ammon: Book of Mormon Comics by Stephen Carter and Jett Atwood. Carter and Atwood have the credentials: Carter is an editor at Sunstone, an independent magazine that seeks to foster frank conversations about Mormonism, and he and Atwood collaborated on the book Mormonism for Beginners.

Like its source material, iPlates tells incredible (and often gory) stories about Hebrew prophets, missionaries, kings and warriors living in the Americas before Christ’s birth. The stories in iPlates center on:

iPlates doesn’t chain itself as tightly to the minutiae of the source material as other visual adaptations of the Book of Mormon I’m familiar with, such as the epically tedious Book of Mormon Movie

or the reasonably-entertaining-but-too-didactic Animated Book of Mormon Stories. Instead, iPlates uses the Book of Mormon’s skeletal stories as a starting point, fleshing out the details to create interesting, relatable characters.

Browse my other book reviews and Mormon posts.