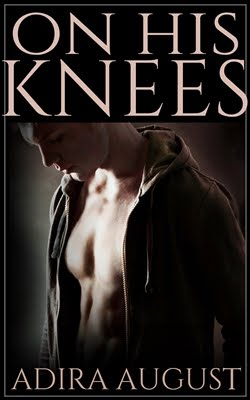 I bought On His Knees by Adira August because it’s one of the books that’s part of Books Save Lives. Through May 31 (next Wednesday), August is donating all proceeds to the Russian LGBT Network to save lives of gay Chechens fleeing Chechnya’s anti-gay purge.

Let’s get a few things out of the way first. This isn’t a romance. There’s desire aplenty between the protagonists, but no romantic love.

It’s not stroke fiction, designed to get the average reader off as quickly and dramatically as possible while they hold the book with one hand.

On His Knees is erotica in the most basic sense: “stories written about the sexual journey of the characters and how this impacts them as individuals.” (Thanks for that definition, Sylvia Day!) And this particular journey is gritty and gut-wrenching.

Homicide cop Hunter Dane has just dealt with one of the most disturbing crime scenes of his career. (Skim or skip the italicized sections of the narrative if you don’t want to know about it, because even though the descriptions are short, they are vivid and unsettling—a lifetime’s worth of nightmares in a few words.)

He can’t get it out of his head, not by drinking or thinking or talking to a therapist.

Sexual submission is the only thing that helps him deal with his demons. And this time, he needs something extreme. He needs a dominant who will push him past his usual boundaries and break him down. It’s the only way to rid his soul of the terror and anxiety plaguing it.

But saying he wants Camden to fuck him would make the actual fucking less humiliating, and Hunter has a psychological need to be thoroughly humiliated. So they toss aside safe-sane-consensual rules for the sake of the scene. It also serves the story’s plot well. But whether that’s a good idea for people to do in real life is a whole separate issue.

The rest of the book is the story of their encounter, and Hunter’s psychological unraveling and eventual healing — at least for the time being — as a result of it. Personally, I didn’t find any aspect of the encounter arousing, but that’s not a dig on the book. Arousal wasn’t really the point. The point was Hunter’s journey. Sex was just a means to an end.

The writing itself is vivid without being flowery. The narration varies—sometimes in third person, sometimes in first person from either Hunter or Cam’s point of view. Switches like that can come across as gimmicky, but for me they flowed pretty naturally, and I didn’t get confused about who was telling the story.

Overall, though, the story was cohesive and well-written, with a strong narrative voice that many readers will enjoy. I’d recommend this book to people who enjoy psychological dramas, literary erotica, and gritty crime stories.

You can buy On His Knees from any Amazon store worldwide. It’s also on Kindle Unlimited.

(With KU, I assume you’d need to read the whole thing before May 31 for the page-count earnings to go to the Russian LGBT Network.)

The next part of Hunter and Cam’s story, Matchstick Men, will be out later this year.

Find other books with proceeds going to save the lives of gay Chechens at Readers & Writers for LGBT Chechens. There, you can also learn where to make direct donations and send petitions.

2 thoughts on “Book Review: On His Knees by Adira August (proceeds through May 31 go to Russian LGBT Network)”