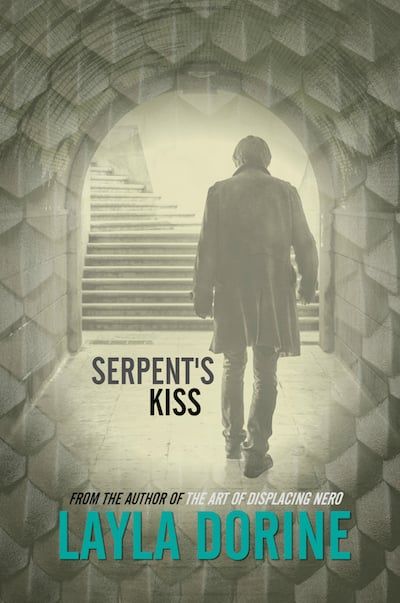 I fell in love with Layla Dorrine’s writing last year when I read “Forbidden,” her contribution to Wayward Ink Publishing’s Mix ‘n’ Match anthology. It’s a deftly told story about an interracial male couple in a provincial South Carolina town where white and black rarely mix socially, and same-gender love is even less heard of. The characters felt so real to me, and the setting palpable. I hated to turn to the last page of the story, even though the ending was truly perfect. So I went right back and re-read it, lingering in Eugene and Sage’s love.

So of course I jumped at the chance to read her new novel, Serpent’s Kiss. As paranormal fiction, it’s a completely different kind of story, but it still touches on themes of identity, community, and finding your own path despite the expectations of family.

Darell is a bounty hunter, estranged from his family and with a checkered past he can’t completely remember. Distanced from his own inner life, he nevertheless easily slips into the minds of others. All he has to do is look at or touch a person, and he can hear their thoughts as clearly as speech.

It’s a skill that makes landing bounties easy for him, until one day two intriguing strangers show up at his house and refuse to leave. Zaiden and Kaandhal are members of a secretive clan of snake shifters—people who possess attributes of both humans and reptiles. With slitted pupils, no auricles around their ears, and scales covering their shoulders and framing their faces, they have a look that might unnerve most people. Instead, Darell finds himself drawn to Zaiden — and as they begin the search for Zaiden’s lost brother and Darell becomes immersed into the life of the clan, the attraction only grows deeper.

That attraction is the key to Darell’s past. As he begins to unlock it, long-suppressed memories bubble to the surface. First come little things, like his long-lost birth name, Darian. Slowly, more unfolds—until he finally discovers who he was meant to be.

Serpent’s Kiss is a wild ride full of mystery, intrigue, and suspense in a society that’s been driven underground. Readers who enjoy fantasy filled with political machinations, assassination plots, and outsider heroes will be drawn in by this novel. Of course, there’s romance too, but it never gets as steamy as I expect it to — if you’re squeamish about snake sex you can read this book without blushing too much.Where to Buy

Serpent’s Kiss is available on Amazon.

LAYLA DORINE lives among the sprawling prairies of Midwestern America in a house with more cats than people. She loves hiking, fishing, swimming, martial arts, camping out, photography, cooking, and dabbling with several artistic mediums. In addition, she loves to travel and visit museums, as well as historic and haunted places.

Layla got hooked on writing as a child, starting with poetry and then branching out, and she hasn’t stopped writing since. Hard times, troubled times—the lives of her characters are never easy, but then what life is? The story is in the struggle, the journey, the triumphs, and the falls. She writes about artists, musicians, loners, drifters, dreamers, hippies, bikers, truckers, hunters, and all the other folks that she’s met and fallen in love with over the years. Sometimes she writes urban romance and sometimes it’s aliens crash landing near a roadside bar. When she isn’t writing or wandering somewhere outdoors, she can often be found curled up with a good book and a kitty on her lap.

Layla Dorine can be found at: