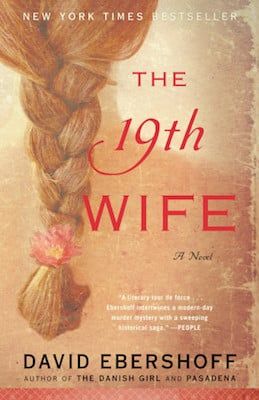 Unfortunately, Jordan’s story gets shorter and shorter shrift as the book goes on. The 19th-century narrative takes up more and more of the book as it progresses. It starts to feel like a historical info dump, and it meandered at least as much as the original memoir upon which it was based. I was hoping Ebershoff would use the narrative tools of fiction to illuminate the underlying theology that produced Mormon polygamy. But we get almost no discussion of religious belief, which is weird for a novel whose plot hangs on those beliefs. And sometimes the doctrine that does get mentioned is historically inaccurate. For example, Eberhoff’s fictionalized story has early polygamists marrying some of their plural wives in the temple “for time” rather than “eternity.” This makes no sense. Temple marriage is always “for eternity,” meaning that the people sealed in marriage are believed to remain married after death. (“For time” means the marriage ends at death, i.e. “death do us part.”)

The whole theological purpose of plural marriage was to ensure the married partners’ eternal exaltation and to create patriarchal families that would exist forever, as explain in LDS scripture in Doctrine & Covenants 132. But the narrative of The 19th Wife represents “for time” plural marriages as common practice during the early white settlement of Salt Lake City. This error made it difficult for me to trust any of the doctrine or history presented in the story.

My recommendation? Read the modern story and skim through the historical parts. And if you’re still trying to understand why Mormons ever practiced polygamy, read Doctrine & Covenants 132, Rough Stone Rolling, In Sacred Loneliness; then listen to the Year of Polygamy podcast.

Browse my other book reviews and Mormon posts.