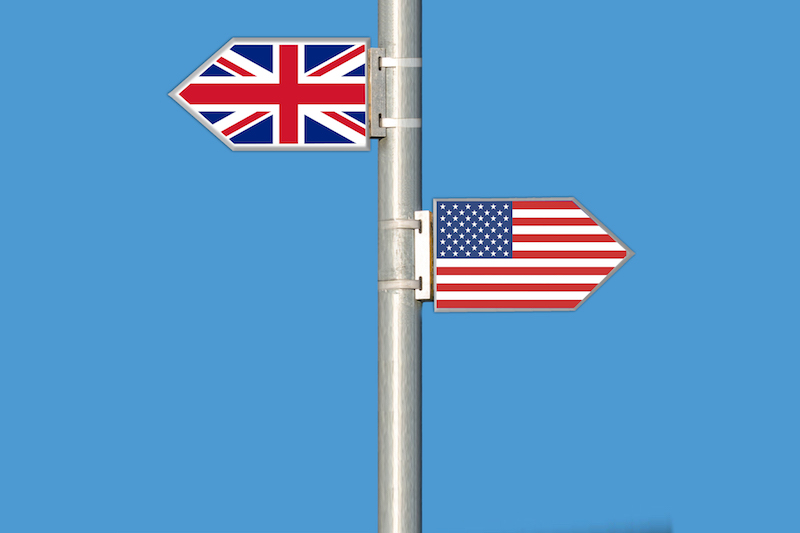 In this installment of Pen to Pen, a series of guest posts by authors about all aspects of writing and language, romance and fantasy writer Rhidian Brenig Jones stops by to talk about the some differences in British English and American English that writers often miss when they’re writing in a dialect they’re not accustomed to.

It’s a popular subject—a couple months ago, writer David Dawson wrote about the hilarity that ensued when he moved to San Francisco and kept using the vocabulary he’d learned back in Great Britain. So consider this Britain and America, Divided by a Common Language: Part 2.

If you have your own opinions and insights about language differences, feel free to contact me with an idea for part 3!

Britain and America, divided by a common language: Part 2

The United States and the United Kingdom—“Two nations divided by a common language.” Was George Bernard Shaw correct if, indeed, he said it? We Brits fondly imagine that we understand you, and you think that you understand us, but do we?

I’m a huge fan of MM historical romance tales, read them voraciously and I’ve written a few myself, but I’m afraid that my eyes roll and my Kindle snaps shut if the language isn’t right. When isn’t it right? When does it jar, giving a Brit a sharp intake of breath? Let’s look at an example of what I’m talking about.

A particular American writer set her story in Victorian England (you do know that England and the UK aren’t the same thing? Don’t you?) Her story was well-constructed, well-plotted, exciting and deeply sexy, but…the minute her English aristocrat told me that he’d “gotten atop” a burly stable hand after he’d been “horseback riding”, the spell was broken. He simply wouldn’t have said it.

Why am I telling you this? Not to be hypercritical or supercilious or snobbish. Believe me, I know how hard it is to write, and hats off to any and every writer out there. I only want to help. So, I’d like to (tentatively) suggest that if any American authors want to write with a British voice they ask a Brit to read through their story and red pen any American spelling, words, or phrases. And, of course, it works the other way; I might want to set a story in Chicago or Miami or Bangor, Maine, but I wouldn’t trust myself to get the language right without first shoving the draft under the nose of an American friend with strict orders to highlight the clunking Britishisms.

So, here are some of the errors I’ve found in otherwise great stories. I give the US English first, and British English second:

I think we’ve all got the “fanny” thing, but just in case: your pussy is our fanny. Getting this one wrong can lead to endless confusion, as an American mate of mine on holiday here found to his cost. (You’d say “buddy” and “vacation”. Wouldn’t you?)

I hope this helps, and all best wishes for your writing, wherever your stories are set.

Rhidian Brenig Jones lives in Wales with his husband, Michael, and French bulldogs, Coco and Cosette. He leads an adult literacy program and writes before work when the three best things in his life are still asleep.

For more on the language divide, see Britain and America, Divided by a Common Language, Part 1 by David Dawson.