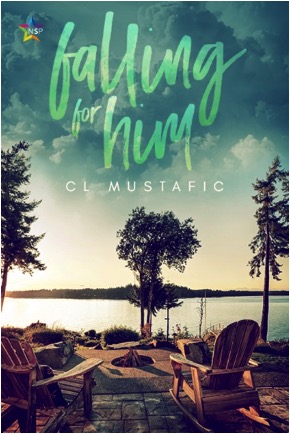 I first met CL Mustafic through an online National Novel Writing Month group, and was happy to learn she’d be releasing her debut novel, Falling for Him, this spring.

But when I found out that Falling for Him featured not just one, but two bisexual protagonists, I was overjoyed.

I love reading queer romances. But I don’t often find stories that reflect my own experience of being attracted to more than one gender. In a typical male-male romance, guys who are dating women at the beginning of the book eventually come out as gay. They realize over the course of the story that their feelings for women are more about friendship than romance.

That narrative is true for a lot of gay guys, and I can enjoy stories that include it. But it’s not the only queer narrative. It certainly isn’t mine.

In CL Mustafic’s Falling for Him, Gavin’s ex-wife’s harasses him so often that the local police know him on a first-name basis. Lex, one of those cops, develops what he thinks is a hopeless crush on Gavin. He’s convinced that Gavin is straight. But things change one night when they’re out dancing and both end up in bed with the same woman.

How’s that for a cute way to hook up? I’m pretty sure half my relationships in college were some variation on that theme—so I, for one, love it.

Soon, Gavin wants to share a bed again—but this time without the woman. Lex convinced it’s “just sex” for Gavin and tries not to let his heart get carried away. When they both realize they’re falling in love, they have to decide whether to take a chance on a relationship—and turn their lives upside down.

I asked CL what inspired her to write a bisexual MM romance. Read her answer below.

Why I Wrote a Bisexual Romance

As a newly published author, I had no idea I’d get the question about where the inspiration for my stories came from so often. Maybe I’m not too bright, but it never occurred to me that people would want to know why I wrote a book that I wrote. I’m going to answer this question because I think it’s important for people to understand why I was adamant about labeling my characters as bisexual and not gay.

A little backstory: I started reading MM romance about four years ago. I stumbled upon an online story, and I was hooked. I read some more free, original fiction which lead me to seek out actual published books in the genre. One of the first books I read was a gay-for-you romance, and while I loved the premise of the book, I came away from it feeling uneasy about it without really knowing why. I read another book that used the same trope and the reason for that uneasy feeling hit me square in the face.

The book’s main character was mourning the loss of his wife, a woman he loved so much that he was devastated by her loss to the point where he was drinking and his life was falling apart. In walks main character two, who’s gay, and they become friends and eventually fall in love with each other. Suddenly main character one is gay! This is what was bothering me, and to tell you the truth it bugged me so much that I went in search of a book with the gay-for-you trope that didn’t end like this. But sadly, I began to realize it’s a thing, and that thing is called bi-erasure.

Now, I’m not saying that people in this situation can’t identify however they like. That’s not for me to decide. But when you’re an author writing about a character – they’re fictional and have no will of their own – you damn well can decide how to label them. It’s as if people have forgotten there are more terms out there to describe a person’s sexual identity than just gay and straight. Heck, I’ve just gotten done reading a thread where some old geezer *side eyes the owner of this blog* was remarking about there being so many and they change so fast now that it’s hard to keep up anymore.

If your character loved a woman for years – truly loved that woman; we’re not talking someone who’s closeted for whatever reason – then he’s not gay. Sorry-not-sorry, but you can’t erase years of someone loving the opposite sex because they fell in love with someone of the same sex. Nope, you can’t, and I’m not going to listen to the arguments of why it’s okay, because they hurt people.

There are real people out there that just want to see themselves represented in a character who looks like them. If we always have ‘formerly straight’ characters identify as ‘gay’ in our MM romances, it means that bisexual readers have no chance to see themselves in the pages of our books.

So, I wrote my own book, Falling for Him. It’s got all the hallmarks of a gay-for-you, or out-for-you, as they like to call it now, but – and this is a big but – both the main characters identify as bisexual because that’s what they are. I guess they could have been omnisexual or pansexual but I’m an old geezer too, so bisexual is the word I’m comfortable with and that’s what I choose.

One of the MCs knows he’s bisexual – has for years – but the other has repressed his sexuality due to some early childhood trauma, brushing off his occasional attraction to the same sex as misplaced feelings of friendship. When he does finally give in to the feelings, it doesn’t erase his prior and ongoing attraction to women.

Bisexual is not a dirty word, and the more we use it to accurately describe the men and/or women we write, the less stigma there will be attached to it.

CL Mustafic is a born and bred American mid-westerner who mysteriously ended up living in one of those countries nobody can ever find on the map of Europe. Between shuttling kids back and forth from various activities and risking her life on the insanely narrow, busy streets of her new hometown, she loses herself in her own made-up world where love always wins.

You can buy Falling for Him as a print or ebook from most major retailers, including:

2 thoughts on “Guest Author: CL Mustafic on Why We Need Bisexual Characters”