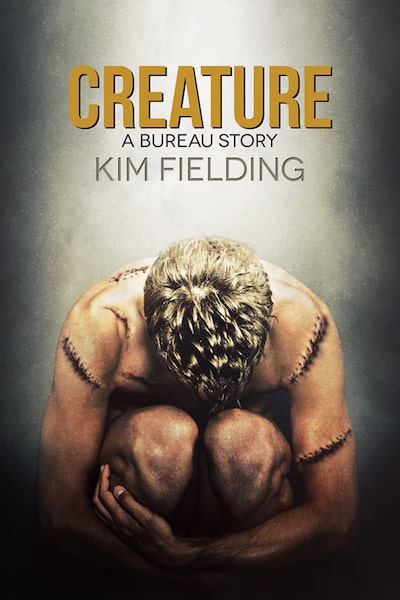 I love Kim Fielding’s speculative fiction. I discovered her through the novel Astounding!, a hilarious and heartfelt romance between a magazine editor and a guy who claims to be an alien from outer space. It quickly became one of my favorite sci-fi romances ever.

She’s fairly prolific, with two new releases this past month alone. One of them is Creature, the third book in her Bureau of Trans-Species Affairs series.  Here’s a description of the series from her website:

For many years the United States government has been aware that Homo sapiens is not the only sentient species inhabiting the country. Some other species were native to the continent, while others immigrated along with humans. Early on, these nonhuman species (NHS) were largely ignored when they lived peacefully within human communities. At other times they were deemed a threat and local efforts were made to eradicate them. The federal government was not involved in these early efforts.

During the Civil War, both the Union and Confederate armies recruited members of the NHS, with varying degrees of success.

By the early 20th century, some local law enforcement agencies expressed frustration with their inability to deal effectively with the special needs of NHS. Localized incidents of mass violence occurred in several locations, most notably the Omaha Zombie Epidemic of 1908, the Manchester (New Hampshire) Melusine Drownings of 1911, and the Eugene (Oregon) Sasquatch Riots of 1915.

In response to these incidents, as well as a heightened desire for increased federal control, President Wilson created a new federal agency in 1919 called the Bureau of Trans-Species Affairs. The mission of this agency was to communicate with NHS, to control them, to investigate reported dangerous actions committed by them, and to bring them to justice or eliminate them when necessary. Since then, the Bureau has been quietly active throughout the United States. Its jurisdiction has expanded to include humans who engage in magical or paranormal activities.

Over the decades, a great many dramas have unfolded among the people who work for the Bureau. The Bureau stories are a collection of these tales. Each involves different protagonists and is set in a different era, yet all focus on the adventures and struggles of the Bureau’s agents. These novellas can be read in any order.

Kim is generously donating all royalties from this series to Doctors Without Borders/Médecins Sans Frontières, an organization that delivers emergency medical care where it is most needed. It serves areas other organizations may avoid—including places affected by violent conflict, disasters, and epidemics like Ebola— and provides medical aid to refugees and others who are routinely excluded from healthcare.

About Creature by Kim Fielding

Alone in a cell and lacking memories of his past, John has no idea who—or what—he is.

Alone on the streets of 1950s Los Angeles, Harry has far too many memories of his painful past and feels simply resignation in facing his empty future.

When Harry is given a chance to achieve his only dream—to become an agent with the Bureau of Trans-Species Affairs—all he has to do is prove his worth. Yet nothing has ever come easy for him. Now he must offer himself and John as bait, enticing a man who wants to conquer death. But first he and John must learn what distinguishes a monster from a man—and what a monster truly wants.

Kim Fielding is the bestselling author of numerous m/m romance novels, novellas, and short stories. Like Kim herself, her work is eclectic, spanning genres such as contemporary, fantasy, paranormal, and historical. Her stories are set in alternate worlds, in 15th century Bosnia, in modern-day Oregon. Her heroes are hipster architect werewolves, housekeepers, maimed giants, and conflicted graduate students. They’re usually flawed, they often encounter terrible obstacles, but they always find love.

After having migrated back and forth across the western two-thirds of the United States, Kim calls the boring part of California home. She lives there with her husband, her two daughters, and her day job as a university professor, but escapes as often as possible via car, train, plane, or boat. This may explain why her characters often seem to be in transit as well. She dreams of traveling and writing full-time.

Check out the complete list of Kim’s books: http://www.kfieldingwrites.com/kim-fieldings-books/