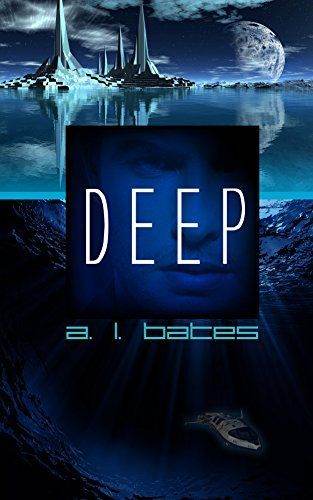 Fleeing from a troubled past that left him feeling tarnished and used, Sean finds work as a medic aboard the deep sea mining ship Ariel on one of Jupiter’s water-filled moons. Under the leadership of the infuriating yet charismatic Captain Joel Riley, Sean settles into his simple—and dangerous—new life. It’s a life he soon comes to love, albeit one in which he conceals his sexuality and avoids intimacy. But Sean’s new world is turned on its head when an old face threatens to expose him for the man he used to be. With Joel’s help, will Sean learn to come to terms with his past and become a man he can be proud of?

My Review of Deep

I got the opportunity to read an advanced review copy of Deep while I was on vacation in January, and it was a great read for the mood I was in: light, fun and adventurous. It was action and plot-oriented, with just enough worldbuilding to make it clear the characters were on a different planet (or moon, in this case), but not so much that it bogged down the narration. Details appeared naturally when they were relevant to the plot, so the reader gets little hints throughout the book to build a fuller understanding, which I enjoyed. Both the adventure and romance kept me engaged with the story until the end. While Sean identifies as gay, Joel is more aptly described as heteroflexible. Sean spends the first part of the book assuming, however, that Joel is entirely straight and the crew likely homophobic. His assumptions on both fronts get challenged when Sean gets outed by a deep sea interloper.

I got sucked in by the first paragraph of Deep and only put it down when I had to pay attention to my fellow vacationers. If I’d been alone, I would have refused to leave the couch until I was done.

Keep reading under the cut for an interview with A.L. Bates, excerpt, and a chance to win a giftcard for a free copy of Deep!

THE HARDEST THING about working on Ariel was the absence of day and night. That deep in the ocean the hours passed in meaningless numbers as the ship floated in the endless depths of Titan, a rich oceanic moon orbiting Jupiter. Sean’s body clock had never adjusted. Three seasons underwater and he still found himself falling asleep during his shift in the infirmary or staring up at his bedroom ceiling, wide awake.

Sean stretched and yawned. His body had changed dramatically since he’d taken his first dive, too. You had to be strong and maintain good physical health working this deep. His body was toned and lithe and bigger than it had been when he first showed up on Titan looking for a job.

“You’re a bit young and scrawny to be a doctor, aren’t you?” the captain had said to him that day in the docking station, seeing a man barely scraping twenty-three and not fit for more than standing around and looking pretty.

Sean had given him some pompous reply that still made him cringe when he thought back to it. Sometimes
he suspected the captain only took him on to try to break him. Captain Riley could be a sadistic bastard when he wanted to be.

I had the idea of a burly crew embarking on dangerous missions under water. They had to be working class, hard-working, and strong so deep sea mining was a natural option for me. But mining for ocean minerals in the way that they do just wouldn’t be possible on Earth, so I decided to move them all off-world, to my oceanic moon Titan. Having a crew not native to Earth really helped when balancing the differences between the rest of the crew and Sean, the Earth-bred ship’s doctor too.

I enjoyed the cast of characters that made up the crew of the Ariel. Sometimes in stories with lots of background characters, I get lost as to who is who, but I thought you gave each of them a distinctive voice and personality. Did you have a favorite among the minor characters?

Well thank you for that, I guess it helped there were only six crew members and one interloper. Aside from the heroes, my favourite character was Harvey. He plays such a minor part in the story but his scenes were really fun to write. He’s a big, clumsy oaf who keeps injuring himself throughout the story. And I loved creating the side love story between him and Selena, especially because it was so awkward and disturbing,

Speaking of the Ariel, was she named after Disney’s Little Mermaid?

Actually it was named after the character from the Tempest, (or I could just be lying and trying to sound intellectual – you decide).

The main characters work together for almost 3 years before they fall in love. What do you like about writing a slow-burn romance? [I can eliminate this question if you consider it a spoiler, but since this a romance I think readers would assume the main characters fall in love eventually.]

I like complicated characters with lots of layers and depth. Normally they’re broken or tormented souls and so an easy going romance just doesn’t suit them. Sean and Joel are both emotionally stinted and it takes a severe shift in their perspectives of each other to realise they could be more than crew mates. I guess overall I’m just a sucker for a will they/won’t they romance and the ups and downs of getting together.

The main characters don’t seem to have very much in common at first glance, but you did a great job convincing me of their mutual attraction. Was it a challenge to write a romance where the two heroes have such different personalities and backgrounds?

Actually I think Joel and Sean had the most important thing in common. They both love the same things; the crew and the ship. Although they come from very different walks of life – Joel a born and bred miner, Sean a rich doctor – their cores are very similar and they compliment each other. Whereas Joel is brash and uncompromising, Sean is patient and caring. While Sean is socially awkward and uncertain, Joel is determined. When writing Deep I just felt them both fitting together, so I guess it wasn’t a challenge at all.

How did you start writing and publishing? Would you consider science fiction your main genre? Romance? Or do you like to play in multiple genres?

I’ve always written, but submitting Deep to Wayward Ink was a big step for me. I’ve never written in the romance genre before and I was extremely nervous about how well the story would be received (in fact I still am). Sci-fi is more my type of thing, but I love writing all kinds of genres. Normally my stories have romance elements, but for me as a reader, I usually want more from my books, so I try to give more when I write.

Do you have plans to write more about these characters or this setting in future books?

I never intended to do a sequel to Deep. This story definitely finishes for me and that’s where I intended it to end. After submitting this novel to the publishers I moved on and started on another book (which is soon to go through editing with Wayward Ink) but then we started all the publication process on Deep and I was drawn back to the characters. I realised that actually there was more to give and I couldn’t leave them just yet. Their relationship is just too interesting. I’m about halfway through the sequel to the story. I can tell you it’s about Sean’s past, Joel’s future and there’s some space travel involved too.

Thanks for taking the time to answer my questions. I enjoyed reading Deep and look forward to the sequel. How can readers stay in touch with you?

I’m happy you enjoyed the story. If readers do want to connect with me, pop over for a chat via Facebook: https://www.facebook.com/authoralbates/

A.L. BATES is an avid writer of sci-fi and adventure. Deep is Bates’ first published novella.