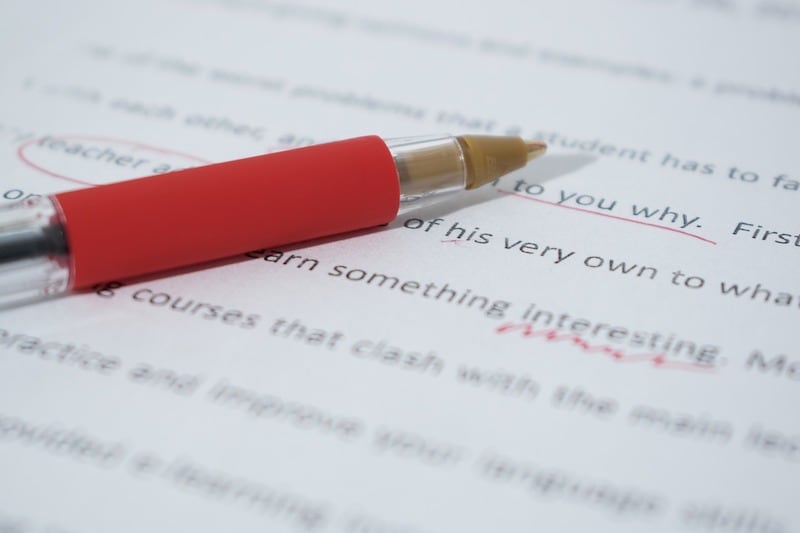 I spent much of this past week refining a piece I’d written for an open submissions call. Over the years, I’ve developed into a ruthless editor of my own prose, thanks in part to my experience editing other writers’ work. Editing is not the time for sentimentality. I tightened the plotline, got rid of passages that didn’t move the story forward, removed weasel words, and erased anything that started to bore me on the second, third, or seventh go-round.

Finally, the manuscript was ship-shape. It was a piece I was proud of.

And I was 600 words over the submission call’s maximum word count.

What’s a writer to do when they’ve revised a story so many times they can no longer see its flaws? While humans make the best editors, they’re not always available thirteen hours before a deadline.

Copyediting software is different from the run-of-the-mill spellchecker that came with your word processor, and it’s more robust than services like Grammarly, which focus only on grammar and punctuation. Those services are useful—I’ve never regretted passing a blog post through Grammarly before publishing it—but they won’t help you trim fat from your stories.

To do that, turn to online apps like Hemingway, editMinion, Editsaurus, and ProWritingAid. These copyediting apps highlight potential flaws in your writing like:

Keep in mind, most of these are for analyzing advanced drafts only, so they don’t check grammar or punctuation. The exception is ProWritingAid, which does both in addition to its copyediting tasks.

Here’s a little tour of the apps I used to help me identify chaff in my “ship-shape” manuscript. Two of them are completely free (editMinion and Editsaurus) and two offer free version paid versions (Hemingway and ProWritingAid). As you might expect, the paid apps offer extra analysis and more ease of use, but the free apps are a good place to start if you’re not ready to invest. 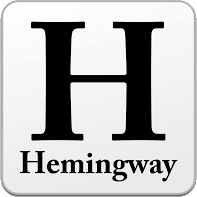 Hemingway has a minimalist interface and memorable name—a nod to the Nobel Prize-winning author Ernest Hemingway. Hemingway was famous for his unadorned prose. He eschewed adverbs and tended toward simple sentence structures. While his stories were complex, the language he used to tell them was not.

The Hemingway app evaluates your prose for simplicity and ease of understanding. When you paste your text into its editor, it highlights:

Here’s a screenshot of Hemingway in action:

The Hemingway app acts as a word processor, allowing you to write and edit right in the app. It makes suggestions as you type, right in the same space where you’re working. If it highlights an area yellow, which means it’s “hard to read,” you can go right into that highlighted area and edit the text directly. This makes it different from other free apps, as we’ll see below.

Hemingway has free and paid versions. The paid version allows you to work offline and has some other perks as well.

editMinion is a totally free editing app, and it emphasizes different aspects of writing than Hemingway. It doesn’t check for complex sentences, but it does check for lots of things Hemingway doesn’t, including:

It also has a homonym and homophone checker, meaning it will highlight words that are commonly misspelled because they sound like another word, e.g. “they’re,” “their,” and “there.” Look over these highlighted words to make sure you picked the correct form.

The one drawback is that editMinion isn’t designed for writing and editing directly in the app. You paste your text in a box at the top of the page, hit the “edit” button, and it spits out suggestions at the bottom of the page. You need to go back and forth between the suggestions and the document you are editing if you want to make editMinion’s changes. That might not be a problem if you’re working on a desktop, but it can present a challenge on small screens. 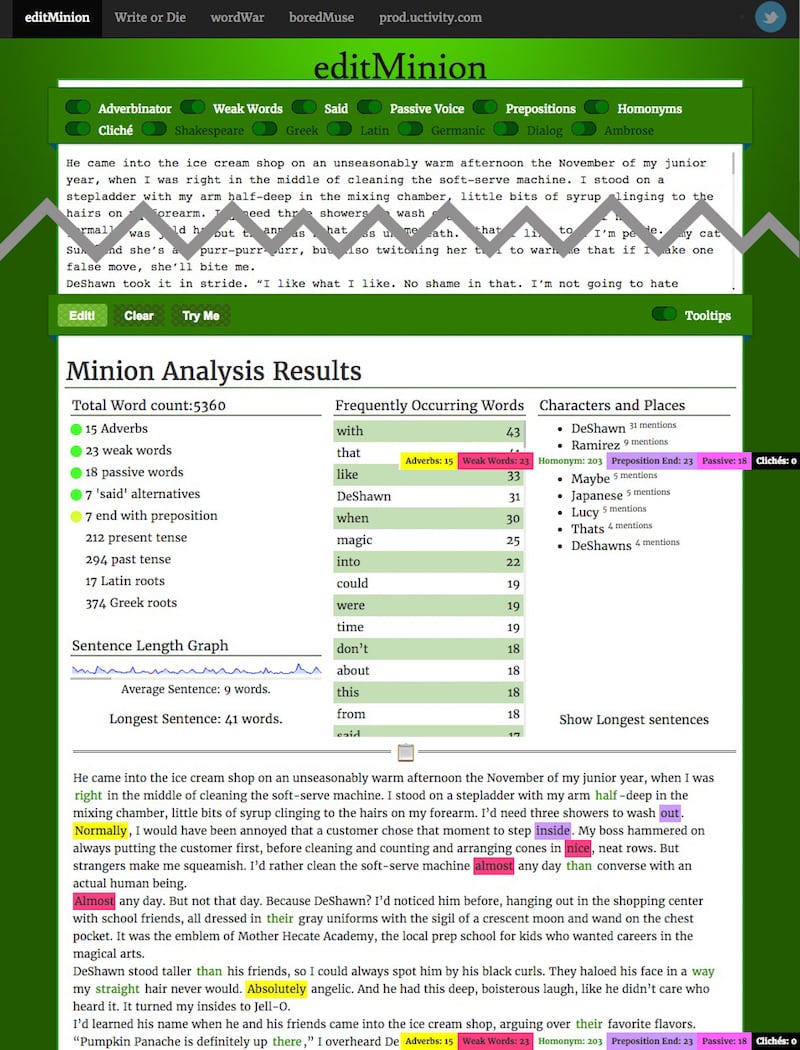 Overall, I prefer editMinion to Hemingway because it provides more usable information. Plus, I like that I can switch features on and off. If the only dialog tag you ever use is “said,” then you can turn off the “said” feature without worrying.

But it’s not my favorite free app. That title goes to …

Editsaurus is another completely free app. It provides feedback on many of the same categories editMinion covers, but there are differences: 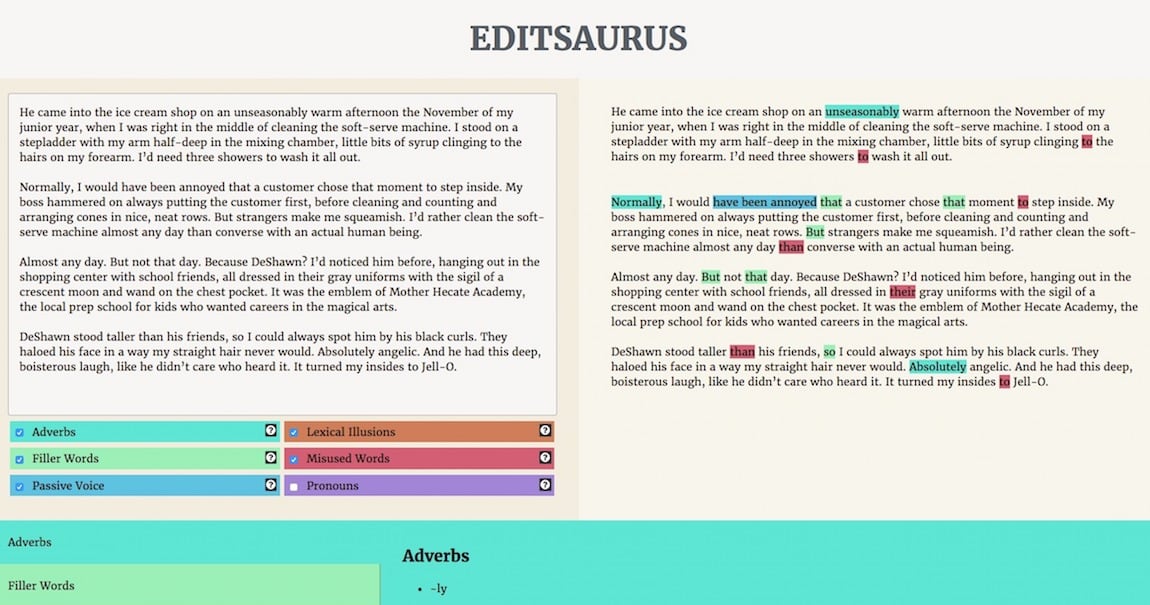 Like editMinion, Editsaurus is not designed as a word-processing application. You paste the text you’ve already written into a box on the right, and on the left side, it spits out suggestions. You then choose which suggestions to incorporate into your document.

Editsaurus is my favorite of these apps because it’s the best of the free apps at catching the types of errors I make. But if you use a lot of overly complicated words I could never figure out where to put your prepositions, then one of the other apps might suit your needs better.

Pro Writing Aid combines all the features of the apps I spoke about above and has other features as well, including:

How does Pro Writing manage to do so much? Because it’s truly pro—you have to pay to use it for larger projects. While a free version is available, it only allows you to edit 500 words at a time.

Thankfully, the folks at ProWritingAid have worked to price their product to fall within the budgets of most writers. A while back, when I first looked into ProWritingAid, I seem to remember subscriptions being well over $100 a year. But they now have plans starting at $50/year or $175/lifetime, which is cheaper than Microsoft Word. And they’ve been kind enough to offer a 25% discount just for my readers when you use the coupon code LOWRY25.

I use ProWritingAid for a final review before submitting to publishers, and to do an initial overview when I’m editing for others. It checks grammar, punctuation, the flow of your words and how they sound when spoken—and much more.

Below is a screenshot of the pro-writing aid interface. The toolbar at the top allows you to toggle among different tools, evaluating different aspects of your writing so you don’t get overwhelmed by too much information at once. ProWritingAid also has several plug-ins and downloadable versions so you can use it with your preferred word processor or Scrivener (a popular app for drafting book manuscripts). 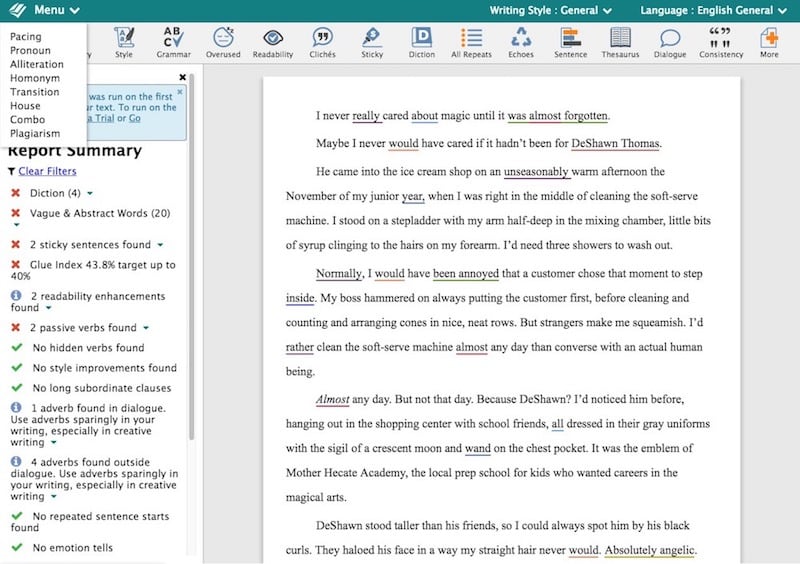 You can learn more at ProWritingAid.com. (Don’t forget to use the coupon code LOWRY25 if you decide to buy.)

Editsaurus is my favorite of the free apps, but I encourage you to try all of them out because a different one might better suit your writing quirks. ProWritingAid is really impressive, but it’s not free. However, its subscription fee is reasonable. For many writers, it pays for itself fairly quickly in time saved.

So you don’t have to scroll back up, here are all the links one more time:

Do you have a favorite online editing app? Or a favorite human editor? Tell me in the comments!

And if you liked this article, check out the rest of my Business of Writing posts.