I spent last week revising a young adult story that had been lazing around on my hard drive, so the topic of this week’s Pen to Pen column by Ginna Wilkerson has been on my mind. Wilkerson recently published the young adult urban fantasy Buried Secrets, for which she had to reacquaint herself with the ways that teens talk—not only now, but also three centuries ago. Read her advice and try out the easy-to-follow checklist below. —Dale

I started my writing life as a poet, and have migrated to fiction in my late fifties. What does this mean? It means I have to be quite conscious of how my characters express themselves.

My personal experience of being a teenager comes from the late sixties and early seventies. I actually said things like “groovy” and “far out.” But, of course, if I’m writing dialogue for a teenaged character in a story set in 2017, I can’t have her sound like she’s using her grandmother’s language.

Talk to people & ask for feedback

So how do I overcome this particular handicap? I ask people. I have used online lists of slang expressions popular in particular years. This method can be helpful, but has its drawbacks. First, these lists don’t take into account educational level or regional differences. If you really want to be authentic (and you do if you want to sell books), you have to match dialogue to the specific demographics of your characters.

My best success in this mission has been from asking specific people in my family and circle of acquaintances what they might say in a particular situation. I have often used my college-aged students for feedback, as I have concentrated on young adult fiction for that past few years. My method has been to send an excerpt to a competent student writer and ask him or her to comment on or change the dialogue to make it more authentic.

Recently, I have been expanding my character descriptions to include a wider age range. A story that I am currently writing has a 28-year-old female protagonist who is college educated and rather quiet in personality. To check the authenticity of what this character says, I consulted my own daughter, who is 30 and a health care professional. I admit that I had made some major mistakes in what I thought this character would sound like. Thanks to Julia, I was able to change the dialogue before I ever submit the story.

A different but related issue is that every character of the same age shouldn’t sound identical. In my recent novel Buried Secrets, there are three teenaged girls who alternate narrating parts of the story. Each girl must have a recognizable voice that is subtly different from the other two. One character is a vampire born in the seventeenth century. Throughout the chapters Mariah narrates, she picks up more and more of the way twenty-first century teens speak. Emelia is a writer, and has a slightly cynical tone combined with sensitivity. She also has a larger vocabulary than the third girl, Hillary. Hillary is a typical teenaged girl in a small town who wants to be anything but typical. So she sometimes exaggerates or is a bit dramatic in her word choice.

Now, what if you have the opposite dilemma from mine? Perhaps you are a writer in your mid-twenties, and you have a 65-year-old character in your story. I can tell you from personal experience that all people in their sixties do not sound the same. My grandson knows that his Nana has tattoos, never wears a dress, and has a different hair color on every visit. That’s me—and my manner and way of speaking go along with these traits. Yet sometimes my adult children accuse me of “talking like a book”—I am, after all, an English teacher.

On the other hand, maybe the Grandma you need to write dialogue for is conservative, cautious, traditional—someone who was in Girl Scout Explorers while I was, well, “living the 70s.” She cannot sound like me, nor I like her.

The bottom line in this message is: don’t assume anything. You may think you are aware of various dialects and ways of speaking, but unless you check with someone of that age and demographic description, you’ve skipped over a part of the writing process. If you want your fiction to speak authentically to a specific reader, you need to check and check again the language of your characters.

Write Dialog for Characters of Any Age (www.dalecameronlowry.com/ginna-wilkerson/) 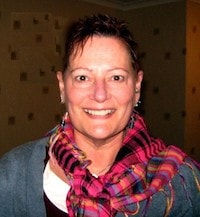 Ginna Wilkerson has a Ph.D. in Creative Writing from University of Aberdeen. Her first poetry collection, Odd Remains, was released in 2013, and her first young adult novel, Buried Secrets, was just released by JMS Books.

Find out more about her at ginnawilkerson.weebly.com.