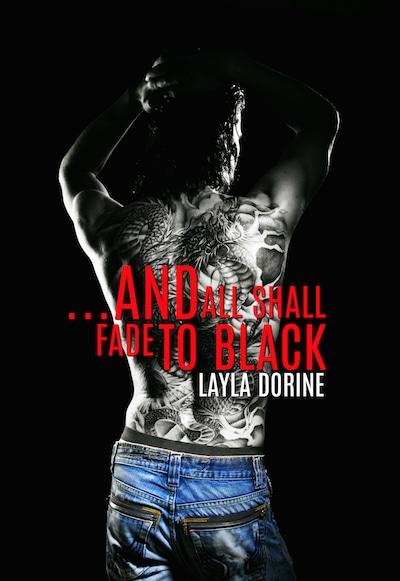 Author Layla Dorine has had a ton of new and re-releases over the past couple months, and I’m happy to have her on my blog again to discuss the latest, called … And All Shall Fade to Black.

Soon after body piercing artist Jax moves into his new apartment, he has to break up a fight between his cute new neighbor Danny and Danny’s ex. Jax and Danny start hanging out, and they find themselves bonding in a way that feels deeper than friendship.

But Jax already has a lot to deal with, like his new job in his sister’s tattoo shop, a mother with a history of unstable relationships, and his own struggles with an eating disorder. The last thing he needs on top of all that is a relationship—right?

As Jax’s insecurities grow more and more out of control, he find himself turning to Danny for help. Danny’s mix of patience, stubbornness and tough love make it harder and harder for Jax to keep his distance, and somewhere in the course of their daily lives, they find that staying just friends isn’t as easy as Jax had hoped.

Layla wrote to tell me about some of the inspirations behind … And All Shall Fade to Black:

Hi Dale, thank you so much for having me on your blog today to talk about … And All Shall Fade to Black, my newest release. Creating this one was a little bit different. Jax and Danny weren’t born in a roleplay world like the characters of my other stories. They were the product of a writing prompt and sort of took on a life of their own. It was also a great chance to combine several things I loved in one story and see how two very different men could come together to form first a friendship, and later something more.

Jax works in his sister’s tattoo shop as a body piercer. The shop is modeled after my favorite place to get tattooed, and an incident in the book with some girls who come in for a nose ring really happened while I was getting my Green Man tattoo done. I wanted Jax to have that working dynamic with his sister, but also a for them to have plenty of room to talk about personal shit they were both going through. So there are many moments in the shop that are as much about helping one another as they are about making money.

In contrast, Danny as a theater manager allowed me to tap into the years I spent hanging around the college theater where my best friend was a tech, watching them set up shows, rehearsals and performances. I drew on those hours and hours of sitting in the front row writing and occasionally helping out when they were short staffed.

My time hanging out in the theater inspired me to take a playwriting class, and in doing so, create Masks, the play that Danny is stressing out over in the story. In… And All Shall Fade to Black, Danny is the writer and about to bring Masks to life for the first time. His work sparks several conversations between him and Jax, and gives Jax a chance to help him with props.

Weaving their worlds together let me draw on so much of my own experiences. The apartments I’d lived in, the people I’ve known, even the incident with Danny that kicks things off—all are taken straight from real life to some degree. The more I write, the more I come to realize just how valuable my life experiences are.

Layla also sent along the following excerpt from the book. Some background to set the scene: Max and Callum are Jax’s longtime friends and downstairs neighbors, and they’re getting ready to play videogames with Jax. Shiro is someone Jax used to have a crush on.

“All right, fine, we’ll do it your way, but when I completely screw it up, we’ll know who to blame.”

“You can’t screw it up, Jax, it’s as simple as picking out the things you like.”

Jax cocked an eyebrow at him and tapped his foot, and Callum cringed.

“Okay, I should maybe amend that. It’s a matter of picking out the things you like that would actually work well together to create a space with some harmony and unity,” Callum remarked sheepishly. “So please, no two-dollar paintings on crushed velvet and framed blacklight posters. We’re adults now, time to be more sophisticated about things.”

“Yeah, okay, I’ll actually put some effort into it this time.”

From across the room Max laughed. “Hey you’ve had it easy up until now. You’ve had us decorating most of the house for you. Just remember that if you plan to invite Danny or anyone else over to your place, you might want to consider tones besides black and gray. They’re kind of depressing.”

“They are solid colors that go together. Haven’t you guys been stressing that?”

“Yes, and they’re a good start. Now think about adding some additional shades to that.”

Unscrewing the jar, Jax pulled out a pickle spear and crunched away, thoughtfully running through different shades in his head and dismissing them. It wasn’t that he was picky, it was just that he wasn’t a fan of bright things. “What about purple?”

“Purple can work,” Callum remarked. “Now if you’re done stalling, can you answer my question?”

“The one I asked when you walked in here. You asked how Max knew. What did Max know?”

Silently, Jax headed for a chair and flopped into its overstuffed folds, put his feet up on the ottoman and started crunching on another pickle.

Groaning, Jax glared at the pair, wishing he wasn’t holding the pickles so he could cross his arms. It might have been a little childish, but at that point he was in the mood to pout and stubbornly hold his tongue.

“No shit,” Jax grumbled. “Him and his bellowing put an end to what was shaping up to be a really nice moment. Then he hits me with a remark about Shiro.”

Jax watched as Callum shot a look between him and Max.

“All I said was that he shouldn’t let what happened with Shiro happen between him and Danny.”

“Yeah, and I wanted to know what the hell he meant by that.”

“Oh come off it Jax, we both knew you were pining after Shiro and too scared to do anything to make it happen. Anyone with eyes could have seen that, just from your moods and body language whenever you two were together. What I don’t get is why you didn’t just ask him out or something.”

Jax shrugged and busied himself with another pickle. It was a good question. It was just a complicated one. The truth was, by the time he figured out that Shiro was as bad at picking up on relationship cues as he was, Nozomi had swooped in and asked Shiro out. He’d never been the type to get in between two people, even at the start of a new relationship, and especially not one to do it to friends. So he’d kept his feelings bottled up, half hoping that maybe it wouldn’t work out between them, though the signs had all been there that it would.

Fingers snapping next to his ear drew Jax’s attention and he turned to see Callum grinning down at him.

“You know what, I think you need to pursue things with Danny, if only so you don’t end up looking like a lovesick puppy every time someone brings Shiro up. That ship has sailed. It’s a new day, my friend, and a new city—though there’s one thing that will never change.”

“Me kicking your ass and leaving you to the zombies,” Callum laughed.

“You’re on!” Jax snapped, reaching for a controller.

Max just groaned as he reached for one himself. “I can already see how this night is gonna go. You two are going to be so busy trying to throw each other in the path of the zombies or outdo each other that you’re going to end up killing me in the process.”

Jax glanced at Callum, who was staring back at him, smirking.

“Yeah really, sheesh, I mean, it isn’t like it’s our fault that he can’t stay out of the way. Maybe if he’d learn to dodge a little better…”

“Or duck,” Jax added, laughing and ducking himself when Max threw a pillow his way.

… And All Shall Fade to Black is available for purchase through Amazon worldwide.

You can also read it as part of a Kindle Unlimited subscription.

Get social with Layla Dorine at: