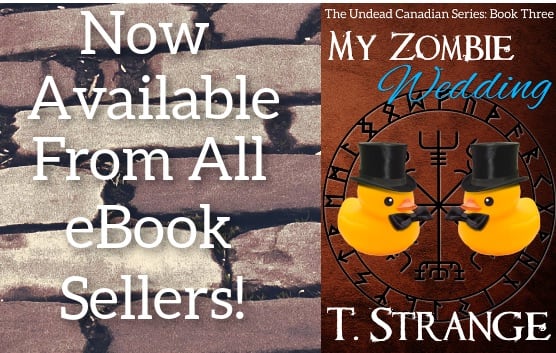 It’s the perfect Halloween treat to have an excerpt from T. Strange’s My Zombie Wedding on the blog today. This is the third book in the Undead Canadian series, an MM paranormal romance trilogy with a wicked sense of humor. Read more about the book below and enjoy the excerpt. If you like what you read, you might want to learn more about the Undead Canadian series or even visit the My Zombie Wedding Pinterest board.

About My Zombie Wedding

Any city is bound to collect restless dead. Armed with the notebook of Icelandic magic his ex-boyfriend, Bone, gave him, Edward Grey has been tasked with removing troubled spirits or finding ways for the living and the dead to coexist in harmony. Between planning his wedding with his undead Canadian fiancé, Kit Ward, and his continued studies as a medical student, Edward didn’t need another commitment, but he can’t turn away people who are frightened or in danger.

A particularly vicious ghost gives Edward an ominous warning—they’re coming—and a few days later Edward’s notebook is stolen from him. While he’s attempting to find it, he and his mentor, Mariel, are confronted by a very powerful necromancer and barely escape with their lives.

On the run, Edward is pursued everywhere he goes, until the necromancers following him manage to capture Kit.

Edward’s hunt for his kidnapped fiancé will take him to the underworld and beyond. 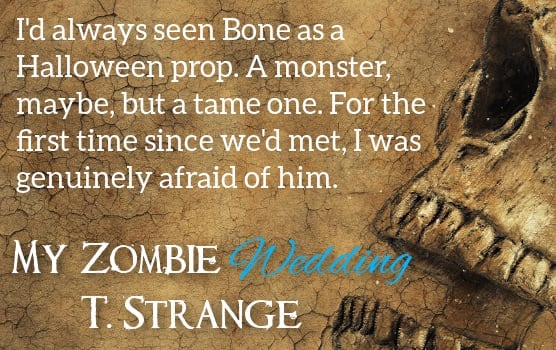 Excerpt from My Zombie Wedding

I was sweating by the time I arrived at Bone’s apartment. I pressed the buzzer for his unit and waited. I was terrified that I’d be grabbed at any moment, that Bone wasn’t home, that they’d already gotten to him and were holding him at gunpoint—it crossed my mind that he’d probably find that sexy, and I dismissed the thought as quickly as possible—and were waiting upstairs to capture me. I had almost convinced myself to walk away, to come up with another plan—though I had no other ideas—when the speaker crackled to life.

“’lo?” Bone’s voice sounded muffled, like his mouth was full. Was he gagged? Was he with someone?

“Who is it?” he asked, when I took too long to answer.

I definitely heard him swallow. “Ed! Come on up, I’ve got a surprise for you.”

The door buzzed and I pulled it open automatically, no longer sure I wanted to go upstairs, but I needed to find Kit and I couldn’t do it alone.

The minute I opened the door between the stairs and Bone’s hallway, something felt…wrong. Usually my intuition isn’t very good, but my forearms and the back of my neck prickled. I tapped on Bone’s door, lightly, with one finger. The door swung open; it wasn’t even fully closed, never mind locked. Not like Bone, not at all. He’s paranoid about security. He usually doesn’t even let me in without physically seeing me first. The hall was strangely quiet, too. Bone usually has screaming, throbbing metal rock music playing. I have no idea why his neighbours haven’t gotten him kicked out of the building—maybe they’ve met him.

A small, triangular face appeared in the doorway, the movement—low to the ground and inhuman—startling me, but it was only one of Bone’s many ‘rescue’ ghost cats.

I clucked to her, and she very cautiously stalked over to me, most of her going through rather than out the door. I wondered, briefly, how Bone kept the ghost cats from wandering.

Petting the cat felt like I was stroking fur submerged in icy water. I was so hot from fear and walking in my unseasonably warm coat that the coolness was almost a relief.

I’d delayed long enough. I nudged the door open, wide enough for more than a cat to pass through. The ghost cat escorted me inside, marching in front of me, kinked tail held high and proud. I couldn’t see any visible signs of how she’d died, the way I could with some of them, and I was okay with that.

The apartment was dark—not only were the windows covered, as usual, in thick blackout curtains, but the lights were all out, except for one at the end of the hall. The bathroom light. Why was Bone in the bathroom, with the door open, when he knew I’d be coming up right away?

The clowder of ghostly felines glowed softly in the darkness, the intensity gently rising and falling to the rhythm of their purrs. It was both beautiful and eerie at the same time. Kind of like Bone himself.

“Hello?” I stepped around several ghost cats, trying not to look at them too carefully so I wouldn’t have to see the gruesome injuries some of them bore. I also had to make sure I didn’t step on Bone’s one living cat, a Ukrainian Levkoy named Rasputin.

“I’m in here,” Bone replied, his voice still oddly muffled. Was he eating in the bathroom?

Strange didn’t want to learn how to read, but literacy prevailed and she hasn’t stopped reading—or writing—since. She’s been published since 2013, and she writes M/M romance in multiple genres. T.’s other interests include cross stitching, gardening, watching terrible horror movies, playing video games, and finding injured pigeons to rescue.

Originally from White Rock, British Columbia, she lives on the Canadian prairies, where she shares her home with her wife, cats, guinea pigs, and a small dog. She’s very easy to bribe with free food and drinks—especially wine.