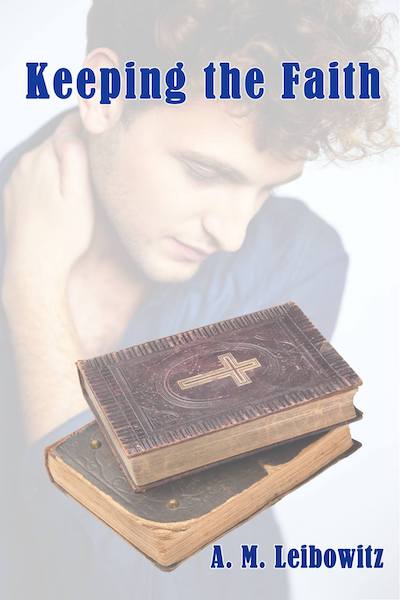 About Keeping the Faith

It’s been three years since Micah’s spouse, Cat, passed away at the age of thirty-six. In the process of cleaning his house, Micah discovers a series of letters Cat hid before he died, in which he made one request: that Micah empty his life of Cat as a way of moving on. Micah has been able to work through his sorrow, but he’s unable to fulfill Cat’s last wish. He can’t see a way past his loneliness despite all the caring people around him.

Enter two new friendships. Jude, Micah’s vivacious new coworker, brings joy back into his life. But she has a big secret about her family, and the truth will rock Micah’s understanding of who she is. Chris, the new minister at Cat’s former church, intrigues Micah. Unlike Jude, Chris is an open book, from his musings on theology to his work as a trans advocate and activist. His gentle manner and deep faith become safe space for Micah to open up about his loss.

Through them, Micah becomes involved with the town’s new community center, where he offers a creative writing class. Using Cat’s detailed letters, he fictionalizes their love story to share with his students. In doing so, he at last begins to sort through his complicated grief. Micah learns he doesn’t have to erase his life with Cat in order to make new memories. He may even be falling for Chris, despite their vastly different spiritual views. With a little help from family and friends, Micah will need to open his heart to love completely again.

Warnings: This book is about loss and grief, particularly the death of a long-term partner. There are scenes of character death, funerals, and reactions to loss. There are also numerous references to spiritual trauma, lgbtqia antagonism, abusive family members, and previous suicide attempts. There are no graphic or detailed scenes of the content, however they are mentioned throughout.

The first thing to know about how faith and culture shape my writing is that I grew up in a mixed/interfaith family with a blended culture. My father’s family were Romanian Jewish immigrants in the early part of the twentieth century. My mother’s family were mostly German and Italian. You can imagine how well that went over in the sixties. Because my father’s, not my mother’s, family is Jewish, I was generally seen as “other” by both Jews and gentiles.

Because in Judaism, the tradition is that Jewish heritage is determined matrilineally?

Yes, in general. In Reform Judaism, as long as a child is raised Jewish, they aren’t strict about it. My father’s family were/are Conservative, so they never recognized us as Jewish.

Were your parents religious? Did they take you to temple or church every week?

I grew up in the local Unitarian Universalist church, so in a sense, yes. Up until high school, I loved it. I learned a lot about many faiths and traditions, including those of both my parents. Unfortunately, my conversion to a strict form of Christianity led me to believe this was wrong and that the good folks of the UU community had it in specifically for Christians. This is not true, but agreeing with that view allowed me to fit in at a time when I felt like a misfit.

How did you start writing about characters from conservative or fundamentalist backgrounds?

As a teenager, I chose to become involved in a conservative evangelical church. There are a lot of reasons for this. That failed experiment did me a few favors, though. It helped me embrace what I sometimes call a “split-screen nature.” Many aspects of my life (religion, sexuality, gender, etc.) have a duality to them.

I have a complicated love-hate relationship with religion and spirituality. I’m a skeptic, but I hold out hope for something beyond humanity. I bear a lot of scars from my years in an oppressive environment, and that comes out in my writing. The first novel in my Faithfully Yours series (which I’ll admit isn’t necessarily my best writing) was an attempt to deal with the trauma and reconcile belief and non-belief within myself.

So much of my writing is along similar lines, usually having to do with the acceptance/rejection dichotomy. That might be physical, mental, or spiritual, internal or external.

Many lgbtqia+ stories include a component of rejection by religious family members. I’ve heard complaints that this is overdone and/or unrealistic.

About your stories, or queer Christian stories in general?

About queer Christian stories in general. In fact, I’ve mostly received positive feedback on my own, usually along the lines of, “I don’t read the religious ones, but…”

While there may be some truth to the overdone-ness, I think it’s simply often done badly by people who have never experienced it personally. It’s also done without the understanding of the structures that create and uphold antagonistic religious views.

There are great books out there which deal with the opposite side of the coin, the welcoming religious communities and lgbtqia+ people of faith. Some readers are not interested in that, which is fine. Those people aren’t my audience either. I don’t generally write books aimed at evangelizing anyone. They’re mostly about the tension that exists between spiritual trauma and spiritual healing. It’s not a simple either/or proposition, and I hope my work illustrates that.

Yes, absolutely. The minister in Keeping the Faith serves in a church I’d already established in previous books was welcoming and affirming.

I am still in a faith community myself, in part because of my family. Our congregation is not only welcoming and affirming, they have a clear statement about it. When my children were younger, we left our very conservative church. The others wanted to find a new one, and at my insistence, we looked for an affirming place. A quick internet search listed our current one as the first result. We were going to try out a few, but after visiting this one, we knew it was a good fit. Though I still joke that my kids only wanted to go there for the playground.

Hey, a nice playground is a totally valid reason to like a church. We had a great one in the one I went to growing up. A nice seventies one where everything was made out of wood. I miss those playgrounds … And the last church I attended was welcoming and affirming, which was a bit controversial in that denomination and continues to be so, unfortunately. I’m glad you’ve found a good space for your family!

Where to Buy Keeping the Faith 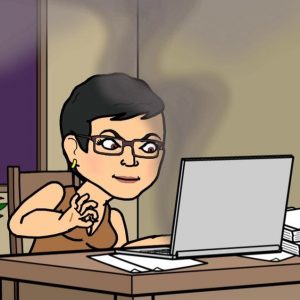 A.M. Leibowitz is a queer spouse, parent, feminist, and book-lover falling somewhere on the Geek-Nerd Spectrum. They keep warm through the long, cold western New York winters by writing about life, relationships, hope, and happy-for-now endings. In between noveling and editing, they blog coffee-fueled, quirky commentary on faith, culture, writing, books, and their family.

2 thoughts on “Author Interview: A.M. Leibowitz on LGBTQIA spirituality and Keeping the Faith”