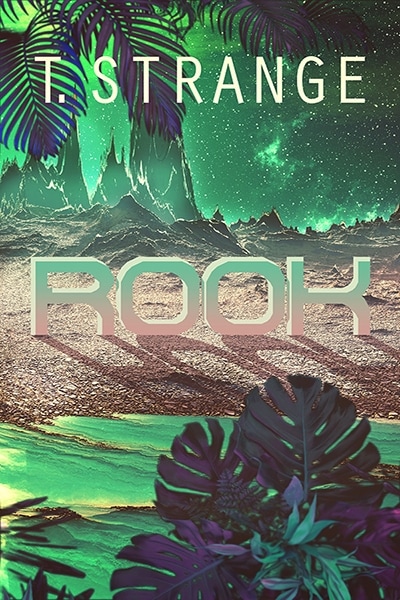 I’m happy to announce that my friend T. Strange has a new sci fi adventure romance out from Less Than Three Press: Rook.

This book starts out with a dark premise: Rook has been arrested and sent to alien planet B-226 for killing his husband. B-226 is populated by deadly creatures, it’s a dangerous place to be: the average life expectancy for a prisoner is three weeks. But Rook is relieved by the sentence—all he wants is to die and rejoin his husband.

On B-226, Rook is partnered with Stevie, who has beaten the odds and survived for several months. Rook is drawn to Stevie in a way he didn’t expect in the aftermath of losing his husband. Before Rook can untangle the mess of his emotions, the already deadly situation on B-226 worsens, plunging Rook and Stevie into an even more desperate struggle to survive.

Rook is T. Strange’s first publication with Less Than Three Press, and she says it’s been a great experience from start to finish. Sci fi isn’t a genre she saw herself publishing—her three previously published novels are all paranormal romance—but this story literally came to her in a dream.

Fun fact: Rook is not the first science fiction story T. has written. As a preteen, she began an epic saga about guinea pigs dealing with the aftermath of a war with cats. In space.

Here’s where you can get Rook:

For killing his husband, Rook is sent to an alien planet populated by deadly creatures, where life expectancy is 3 weeks. Rook is relieved—all he wants is to die and rejoin his husband. Rook by @AuthorTStrange. New M/M sci fi novel from @LT3Press Click To Tweet

T. Strange didn’t want to learn how to read, but literacy prevailed and she hasn’t stopped reading—or writing—since. She’s been published since 2013, and she writes M/M romance in multiple genres. T.’s other interests include cross stitching, gardening, watching terrible horror movies, playing video games, and finding injured pigeons to rescue.

Originally from White Rock, BC, she lives on the Canadian prairies, where she shares her home with her wife, cats, guinea pigs and other creatures of all shapes and sizes. She’s very easy to bribe with free food and drinks—especially wine.

Want more suggestions of books to read? Check out my book review and guest author tags.