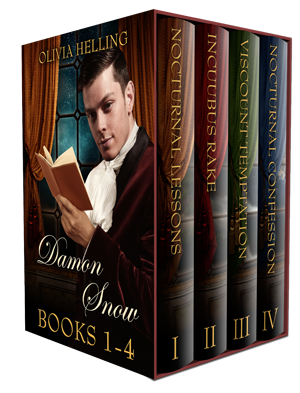 This week, I’m sharing from a story that isn’t mine. It’s from Nocturnal Lessons, Book 1 of Olivia Helling’s Damon Snow series. I discovered this series through Readers & Writers for LGBT Chechens, when Olivia earmarked royalties from all her books for the Russian LGBT Network. Damon is a prostitute, or “molly,” in early 19th-century London, driven to the profession by his insatiable hunger for other men’s orgasms. He’s an incubus, you see, and it’s not all seduction and pleasure. It’s more like having uncontrolled diabetes, Klein-Levin syndrome, or some other metabolic disturbance that leaves you perpetually hungry and unable to satiate yourself.

But in this case, Damon’s appetite is for sex, not food. And he needs a lot of it.

That may sound like a bit of a downer, and to be sure, Damon’s life is not all roses. But in the midst of his dreary existence, he discovers a new type of desire—one that isn’t driven by compulsion, but something much deeper. Something akin to—

Well, love is too flowery a word for Damon. He doesn’t believe in it. His “culls”—his johns—are mere objects, and so are his peers. Damon flinches at the thought of having friends. Any kind of human connection is both foreign and terrifying to him.

Or so he tells himself, until his need for it outweighs his trepidation.

The results are so hot, I swear the paint burned off my walls while I was reading this book.

But I get ahead of myself! In the early chapters of this story, when Damon is still happily/drearily living his life of emotional isolation, we have this scene in which he takes a john up to one of the fancier rooms in the house of ill repute where he works. I chose it because it’s a nice representation of Damon’s sardonic sense of humor. (Note that “molly” refers only to male prostitutes, excluding female ones, and a “bawdy house” is a brothel):

We climbed the last set of stairs and I opened the door for him. The room wasn’t as posh as the parlour. It couldn’t be, not with that particular stucco around the fireplace. Carvings of a man thrusting into a woman’s mouth, a man being whipped by another woman, a woman being taken from behind… not really suitable for a molly house. I’d had more than one cull mention it. But the stucco was only a pence a tile from the factory, since half of the Covent Garden bawdy houses used it too, so Mother Dover had decided it would spruce up the place.

You can find the first four books of the Damon Snow series in a boxed set at most online bookstores. And please check out the other authors donating royalties to help save the lives of LGBT Chechens.