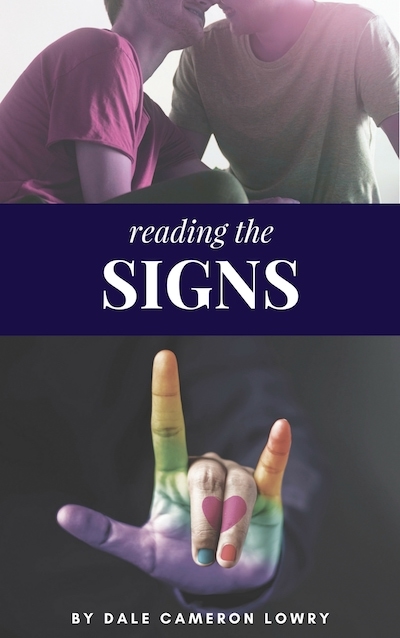 Today is Saturday, which means it’s time for Rainbow Snippets—sharing about six sentences from a book featuring LGBTQ characters.

My snippet is from Reading the Signs, a short story romance about Theo, a Dutch master’s degree student, and Alfonso, an older American professor of linguistics. Both are hearing, but were raised with Deaf family members and are fluent in their local sign languages. Theo attends a summer linguistics institute in New Mexico to learn more about sign languages in general, and that’s where he meets Alfonso—and immediately starts crushing on him and then avoiding him because, you know, crushes. People don’t act logically when they have them.

The only other thing you might need to know for this snippet is that Theo is totally unaccustomed to how bright the sun is in Albuquerque:

Theo had never had a habit of wearing sunglasses before, but he now wore them every time he stepped outside. And even then he found himself squinting against the light.

Which was how, on his second Sunday morning in New Mexico, Theo managed to walk head-on into another student about three seconds after stepping outside, sending their books skittering across the sidewalk.

It was only after the collision that Theo’s pupils finally adjusted enough that he could see the person.

It was a terrifyingly attractive man.

It was Alfonso Grossman.

You can currently download a copy of Reading the Signs from Instafreebie through the MM Romance Giveaway. Enjoy!

Why is it that people avoid the people they're crushing on? I don't know, but you can read about the main character in the sign language romance Reading the Signs doing just that. Click To Tweet

13 thoughts on “Rainbow Snippets: Why is it that people avoid the people they’re crushing on?”