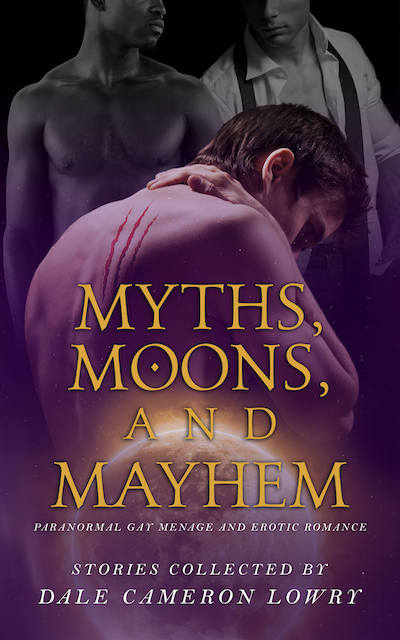 It’s Rainbow Snippets time again. I had to skip last week after throwing out my back during a fun carpentry project (really, it was supposed to be fun—I’m just a bit older than I used to be), but this weekend I return with a snippet from Myths, Moons, and Mayhem, an anthology I’ve edited for publisher Sexy Little Pages that comes out this Friday. It features nine paranormal stories of male ménage a trois, one of my favorite relationship structures to read and write about. I’m so excited to finally get to share these tales with the wider world.

This snippet is from “The Secret of the Golden Cup” by Rebecca Buchanan, a delightful adventure in which a linguistics professor trying to translate an ancient artifact finds himself at the center of a magical war. With an unfairly attractive student and a campus janitor as his only allies, it’s not so easy to stave off the forces of evil.

This snippet takes place before everything goes to heck. Grover, the linguistics professor, is sitting in his office eating Thai food with Dominic, the unfairly attractive student—former student now, as the semester has just ended a couple hours before. It turns out Dominic is not only attractive; he’s also interested in Grover.

Dominic’s eyes were still that ridiculous shade of teal. Grover had tried to convince himself that he had exaggerated the color in his memory, but, no, they really were teal. And right now they were fixed on Grover with an intensity that made his stomach tighten and his cock take notice in a way that it had not for quite some time.

He really should have stayed seated when he had the chance.

Dominic’s eyes dipped. Grover thought that having that gaze off his face for even a moment would help, but it actually made things worse, because Dominic’s eyes were fixed down there and Grover could feel his erection swelling with every breath and every tick of the clock.

Dominic leaned forward, bracing his hands on the desk. “I really, really want to kiss you.”

Rebecca Buchanan is the editor of the pagan literary ezine Eternal Haunted Summer. Check it out!

And if you’re on Twitter, Facebook, or Tumblr, please take a moment to tell your friends about the book. It’s an easy way to get the word out. Thanks!

26 thoughts on “Rainbow Snippets: A classics professor, a handsome student & a campus janitor stave off the forces of evil”