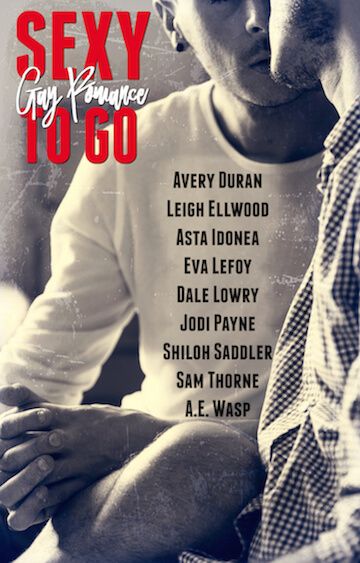 In April, I had the fun opportunity to be part of Sexy to Go Gay Romance, an anthology with a great diversity of short MM romances. Old loves rekindled, falling in love in the afterlife, and gods in love are just a few of its themes.

One happy outcome of participating in Sexy to Go was befriending Jodi Payne, an author of contemporary MM romances.

Jodi’s contribution to Sexy to Go Gay Romance was “Handyman,” the sometimes-hilarious, sometimes-poignant story of Danny, who is haunted by memories of his ex who moved out six months ago. He recognizes just how bad off he is when he wakes up to a flood in his condo. His ex would have handled everything seamlessly, but Danny doesn’t even know who to call. His day starts looking up, though, when handyman Ken shows up to handle the drywall. But can Danny handle Ken?

This story was so enjoyable, from the stoner neighbors who forgot the bathtub was running to Danny’s nascent crush on a straight electrician—and finally, the sexual chemistry between Danny and Ken.

Jodi was kind enough to stop by my blog to answer a few questions about “Handyman.” Welcome, Jodi!

Dale: What inspired your story?

Jodi: Handyman is actually (very) loosely based on real events that happened to my friend Andrea, who has a cameo in the story as Danny’s bestie. Her upstairs neighbors, only one of whom was actually a stoner, let their kitchen sink overflow – for at least an hour – and it really did flood her utility room. Andrea was NOT happy.

Dale: How many times have you had your apartment or condo flooded as the result of your upstairs neighbors being stoned off their asses?

Jodi: Ha! Never. I kind of flooded my own laundry room once, but I wasn’t stoned. I swear. I never inhaled.

Dale: OK, but objectively speaking, who is hotter: an electrician or an all-around handy person?

Jodi: Good question. Electricians are really good with their hands and they tend to carry around zip ties. Both a big plus in my world. But all around handy-people? They’re ready to get their hands dirty. They’re resourceful, they can fix anything and they carry power tools. I think it’s handytypes for the win.

Dale: The characters in your story have incredible chemistry right off the bat, but do not believe in love at first sight. Do you?

Jodi: I do. I honestly, really, deep down in my soul believe. Part of it is that I am a romantic, but I think it’s also because I married my high school sweetheart. It has to be possible, right?

Dale: Your protagonist previously depended a lot on his ex to  deal with a lot of the logistics of being a homeowner. In this story, he has to learn to do some of those things himself. He becomes more self-reliant. How important do you think self-reliance is for a happy relationship?

Jodi: Wow. I kind of love this question. So Danny is still adjusting to being single. Suddenly having to deal with something on your own that your ex-partner would have taken care of when you were together is one of many steps to getting over them and getting your feet back under you. The fact that he has no option but to deal with it himself forces the matter and for Danny that’s good for him because it’s been too long. And for Danny, from that comes the confidence to flirt again, hook up again, connect with someone again.

On a broader note – I think part of what makes a good relationship is that each person brings their own talents and interests to it. So maybe Danny isn’t naturally good with insurance companies and household stuff, but he might be an amazing cook and know a ton about cars. So being self-reliant is more about confidence, and I think that confidence helps you understand what you bring to the table for you partner, and what your needs are.

Thanks again, Jodi, for stopping by!

Readers can learn more about all the stories in Sexy to Go Gay Romance and where to buy it here.