US readers: A spanner is a wrench. Remember that. It’s important. —Dale

Taking tropes and stomping all over them

A trope, as defined by the Merriam-Webster website, is “a common or overused theme or device.” This is not to be confused with a genre, which is “a category of artistic, musical, or literary composition,” e.g., horror, romance, erotica, sci-fi, etc.

Now that’s out the way, I can talk about tropes, or the joys and hazards of stomping all over them.

Then I became bored. The marketplace was flooded with high quality, self-published fiction, so I thought that actually, as an unrecognised author with very little to lose, I could afford to experiment a bit.

My curse has always been a rebellious streak saying, “what if?” Which is why I decided to write a shapeshifter book, deliberately ignorant of what a shifter book “should” be. I had read a couple, but hadn’t picked up the finer nuances, other than they seemed to call each other “mate” a lot, and not in a working-class London pub sense, either. Other general rules seemed to be that they had to have muscles and a motorbike, so one of my protagonists was the Alpha’s son who was still terrified of his father. And the “fated mates” thing didn’t apply at all, because I wanted my other protagonist to have lots of buttock-clenching sex with other people before getting together with the love interest. Apparently, This Doesn’t Happen with Fated Mates. #notsorry

There are risks with doing something like this. For a start, a lot of readers have certain expectations. Say it’s a shifter book, and they want the Alpha striding towards the Omega, roaring “you will be mine!” [Editor’s note: Alpha? Omega? What? Get the explanation here.] And the Omega positively fainting with desire before presenting their perfectly peachy bottom. Those readers don’t want the Alpha to assert authority by shitting on the Omega’s bed, but my view is different. A dog is a dog is a dog. They can be infuriating, cute, sly, and destructive. And hairy. If you’re a dog person, you will understand.

Also, the Omega may not know they’re an Omega. They might be quite happy, trying to find love in a hazardous, human way; dating, hitting bars, having a few horrible hook-ups, fantasising about the skinny dude with no social skills. That kind of thing. They may have a thing for cashmere and scatter cushions.

The upshot was, the readers hated it.

I had steeled myself for this. A chat with a fellow author who also loves throwing in surprise spanners into his work, was concluded by this terse warning. ‘Write what you like. Just don’t expect it to sell.’

And he was absolutely correct. The thing to remember with stomping all over tropes is that readers can hate you for it, and waste no time in letting you know, resulting in a raft of one- and two-star reviews. The key to avoiding some of this is TARGETING YOUR AUDIENCE, although I couldn’t help a gleeful chuckle at all the pearl clutching that went on. It almost made the one- and two-star reviews worth it.

It a difficult thing for a creative person to wrestle with. Lousy reviews come with the territory. Not everyone is going to like your work, however “by the rules” your books are. You can’t please everyone. If you have a strong fan base, then surprising them could be akin to prodding a beehive with a short stick. It is wise to tread carefully, and not just shock your fans with gruesome horror if they’ve been used to soft-focus historical noodling.

But if you’ve been pumping out formulaic novels to appease your doting readership whilst dying quietly on the inside, then maybe it’s time to try the writing equivalent of BASE jumping, and see what happens. I wrote my trope-stomping books under a pseudonym (S.A. Smythe) so I could back away saying “nope, nothing to do with me,” if it all went tits up.…

Romance is an obvious genre to fiddle with, although there are so many tropes that it is hard to find something that hasn’t already been done. Rather like music, someone, somewhere will have used that chord in a totally different song. The key is in interpretation, and how to make tropes fresh and new, bearing in mind that there are exceptions that Should Not Be Messed With Under Any Circumstances. HEA’s are a prime example. A romance simply isn’t a romance without one (see a recent brilliant blog article by Sarah Nicholas on why romances must have an HEA.)

Science fiction and fantasy have even more scope for meddling with tropes. With sci-fi, as long as there is real science to back it up, then the possibilities are endless. With fantasy, anything is possible, so ignore the smart-ass commenting that “elves wouldn’t do that.” Says who? The Debretts Guide to Elven Etiquette? The challenge is to make your ideas fresh and new, challenging and exciting, but above all, compelling to read.

So feel free to stomp all over beloved tropes. The key is in the LABELLING of your book. If people see romance at the start, they may not have noticed the fantasy element way down the bottom of the list, resulting in high dudgeon when a dragon pops up and chomps the leg off a main character. I always put a disclaimer in the front of my S.A. Smythe books; UTTER FILTH or A SMUTTY TAIL, or something like that, so that people know they are going to get something that is a bit of fun, hard-core, and a little unpredictable.

Trying to squeeze a book into a genre when you haven’t coloured inside the lines IS risky, and you will always get some people fluffing up their feathers in indignation at the result. That’s just part of being a writer. Unfortunately, publishing forums like Amazon make it difficult to accurately define some novels. KEYWORDS are therefore crucial as well, so use them to hint at the more deviant elements of your work.

In the end, when I’m asked for advice from would-be writers, I tell them to write what they like, first and foremost. Obviously, make sure the technicalities are top-notch (grammar, punctuation, spelling, editing, yada yada). Then grow a backbone, because criticism and bad reviews are par for the course. Get beta readers and listen to them, but don’t be afraid to stick to your guns. If you’ve twisted that beloved trope until it squeaks, and its absence would destroy the framework of the book, then it has to stay in, no matter how many people say “you can’t write that!”

Yes, you can. In the end, it is your book, your creation, and someone, somewhere will love it. Nowadays the market is so crowded, that hitting the golden vein of loving readers is a bit like winning the lottery. That elusive success story may never happen, but we are writers, so we do it. Time and again. So therefore, the best person to please is ourselves, and hope someone, somewhere, on this planet of nine billion people, loves it. 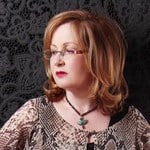 Jayne Lockwood has been writing for most of her life, starting with really bad poetry as a teenager, usually railing against nuclear war (it was the 1970’s.) She has had five Black Lace titles published by Virgin Books under the pseudonym Savannah Smythe and has also published three M/M erotica stories under S.A. Smythe. She helped set up WROTE Podcast in 2015 with fellow writers S.A. Collins and Vance Bastian and is proud to say the podcast is going from strength to strength. She always has at least one novel in the background.

2 thoughts on “Pen to Pen: Taking tropes and stomping all over them”