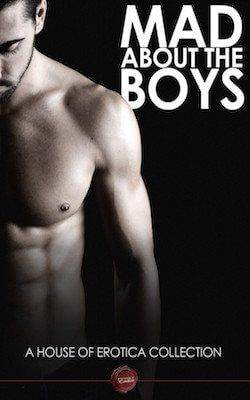 I met Sam Thorne through an online writers group last year and love her stories. It was a delight to find out we’d be published together in the M/M anthology Mad About the Boys from House of Erotica. And when I read Sam’s piece, “Deluded,” I was even more delighted.

I have a soft spot for stories about middle-aged men falling in love (gee I wonder why?) and “Deluded” stands out among the best. This story was a blast to read, with a lot of humor and characters that felt real—not a cardboard cut-out among them. Even the supporting characters have layers of unexpected complexity.

Plus, it was hot. The sex scene reveals so much about the characters and really moves the story forward. While I’m all in favor of gratuitous sex scenes, they’re even better when they’re an integral part of the tale. This one shone.

Physically, gentle giant Max is more than a match for both his good friend Jay (for whom Max has strong feelings) and Rick (a gorgeous, mysterious gay bar local). Unfortunately, they both seem to want someone rougher and tougher. On the night that Max finally gathers the courage to speak to Rick, they’re urgently needed to intervene in a bashing. Max shows the courage that’s been there all along—and accidentally reveals his feelings for Jay.

The gruff scrap merchant looked like Gladiator reborn as a builder. He was a few inches shorter than Max at 6’2” or so, but broad and supple at the same time. Ripped denims clung to large, solid thighs. Triceps like steel bands poked from the sleeves of his scruffy grey t-shirt as he spread his hands out on the bar and muttered his order. His fingers, hands and forearms were littered with tiny white scars that stood out against an outdoorsman tan.

Max decided to let the man make some progress with his pint of Guinness before venturing conversation. Jay downed the first pint in one, then sipped his second and bought some peanuts, nudging the bowl towards Max to share.

He’d enjoyed a few fumbles with Jay, the best of which involved an impromptu fucking in Jay’s dark hallway, Max having to brace himself against the upper corners of the kitchen doorjamb as Jay took him with slow, powerful strokes while tossing him off. He hadn’t been allowed to come until he was raining sweat and struggling to breathe, and he’d relished every second of it. The memory had become his go-to fantasy during his morning shower, but it wasn’t an experience they’d repeated.

Jay had told him, ‘In the nicest possible way, mate, I like my giants less gentle.’ Suspecting Jay was referring more to his hesitant character than his light touch in the bedroom, Max had accepted friendship.

You can buy Mad About the Boys on Amazon, Kobo, or Mondadori; or mark it as “Want to Read” on Goodreads.